Items related to The Hit Charade: Lou Pearlman, Boy Bands, and the Biggest... 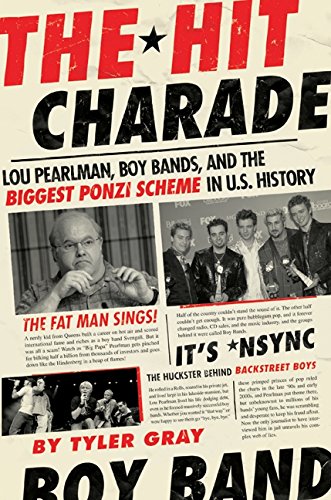 Without Lou Pearlman, there would have been no Backstreet Boys, no *NSYNC, and possibly no Justin Timberlake. In the late 1990s, Pearlman's boy bands ushered out guitar-and-angst-driven grunge music, and *NSYNC and Backstreet Boys began to dominate the television and radio airwaves. At the core of this squeaky-clean pop revolution was a sinister international fraud conceived by Pearlman, a husky huckster who first honed his crooked business skills as a teenage math nerd and blimp enthusiast in Flushing, Queens. From there in the mid 1980s and from his Orlando, Florida, base in the early 1990s through 2007, he cheated hundreds of investors out of nearly $500 million. When they finally caught on to him and started demanding he return their money, the “Sixth Backstreet Boy” had already fled to Germany and then to Indonesia, where he was eventually nabbed by authorities and charged with a historic federal fraud.

Tyler Gray (the only journalist to speak with Pearlman while he was in jail) weaves together the fascinating behind-the-scenes story of the greed and desperation of this boy-band mogul and monumental scam artist. Gray unravels Pearlman's twenty-year long Ponzi scheme and explores persistent rumors about alleged inappropriate behavior by Pearlman toward members of the boy bands and other young men. Along the way, former friends, family members, Pearlman business associates, and band members themselves reveal detailed accounts of everything from the heyday of their stardom to Pearlman's more troubled times.

The Hit Charade starts with Pearlman's awkward youth and follows along as his juggling act becomes increasingly complex, then builds to the heartbreaking moments when investors—retirees, relatives, and friends—and government authorities discover that the man they had trusted had been cheating them all along. How did this chubby boy from middle-class Queens, who pioneered some of the music industry's most lucrative pop ensembles, mastermind one of the largest and longest running Ponzi schemes in U.S. history? Here, finally, is the true story of Lou Pearlman's epic rise and fall.

In his thirteen years as a journalist, Tyler Gray has covered everything from a teenager's death-penalty trial for murder to the drug- and sex-fueled shenanigans of fuzzy theme park characters in Orlando, Florida. His stories have appeared in the New York Times, Esquire, Radar magazine, Men's Journal, the New York Daily News, the Orlando Sentinel, the St. Petersburg Times, and other publications. He has appeared as a pop-culture and news commentator on ABC, CNN, MSNBC, FOX, Comedy Central's the Daily Show with Jon Stewart, and other television broadcasts. Gray is currently a senior editor at Blender magazine in New York City.

In the wake of phenomenally successful tweeny-bopper pop stars like Miley Cyrus and the Jonas Brothers--as well as the recent reunion of boy-band New Kids on the Block--the time is right for a good look at the ever-present sleaze of the music industry, and journalist Gray provides it in great, greasy bucketfuls. His focus is Lou Pearlman, the manager of the Backstreet Boys and INSYNC who, Gray explains, used their earnings to finance his exorbitant lifestyle including a multimillion-dollar mansion, a fleet of private planes and expensive cars, and, inevitably, "a shady world of endless investments." Gray's look at the bands' music is serviceable. However, Gray has a keen eye for business, and he writes fluently in detailing how Pearlman with "an assembly of hucksters as his new business partners," massively scammed not only his boy bands (he collected "50 percent of all recording royalties, 100 percent of all advances") but hopeful model wannabes as well as gullible investors, including Pearlman's first cousin Art Garfunkel and government officials of Orlando, Fla. (Nov.)
Copyright © Reed Business Information, a division of Reed Elsevier Inc. All rights reserved.

6. THE HIT CHARADE: LOU PEARLMAN, B