Items related to A Hard Death: A Novel

A Hard Death: A Novel 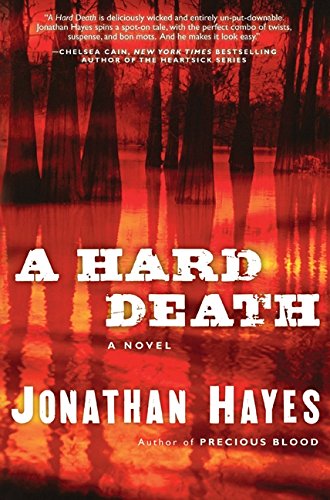 “A real player in the game of forensic sleuthing.” —Kathy Reichs, author of Spider Bones

Forensic pathologist Edward Jenner returns in this explosive sequel to Precious Blood—an edgy, electrifying thriller set in a small-town coastal community where nothing is as it seems. Fans of Sam Bourne, Jefferson Bass, and James Grippando will be captivated by Jonathan Hayes’s intricate tale of betrayal, blood, and conspiracy—a chilling suspense novel made all the more enthralling by author Hayes’s vivid details, culled from a lifetime of first-hand experience as a homicide forensics specialist in New York City.

Brilliant forensic pathologist Edward Jenner returns in this explosive sequel to Precious Blood—an edgy, electrifying thriller set in a small-town coastal community where nothing is as it seems.

Edward Jenner, introduced in Precious Blood, has survived the horrific ordeal of the Inquisitor serial killings in New York, but not the political fallout. His state medical license suspended, Jenner finds himself banished to Douglas County in coastal Florida, working as a medical examiner in the balmy seaside resort of Port Fontaine.

But there's a seamy underside to picturesque Douglas County. First Jenner finds the bodies of a murdered man and woman decaying in a sunken car. Then an anonymous call in the middle of the night leads him to a gruesome discovery in the heart of the Everglades. He finds traces of a shadowy criminal conspiracy, and soon learns that he can trust no one.

With his life on the line, Jenner refuses to walk away and let the murderers go unpunished. The result is dark Florida noir, a fierce, edge-of-the-seat thriller from an emerging master of the genre.

Jonathan Hayes, a veteran forensic pathologist, has been a New York City medical examiner, performing autopsies and testifying in murder trials, since 1990. A former contributing editor at Martha Stewart Living, Hayes has written for the New York Times, New York magazine, GQ, and Food & Wine. He is also the author of Precious Blood.