Items related to Scoundrels in Law: The Trials of Howe and Hummel, Lawyers...

Murphy, Cait N Scoundrels in Law: The Trials of Howe and Hummel, Lawyers to the Gangsters, Cops, Starlets, and Rakes Who Made the Gilded Age

Scoundrels in Law: The Trials of Howe and Hummel, Lawyers to the Gangsters, Cops, Starlets, and Rakes Who Made the Gilded Age 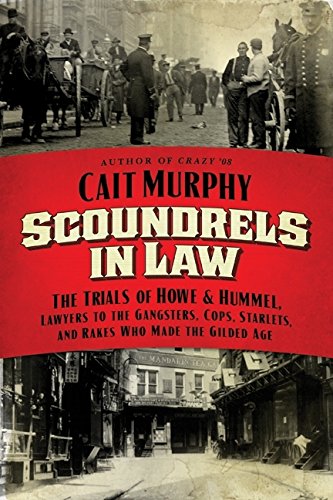 “A delightful romp through the theatrical courtrooms, seedy back alleys, and elegant parlors of Gilded Age New York.” —James McGrath Morris, author of Pulitzer: A Life in Politics, Print, and Power

Cait Murphy, author of Crazy ’08, is back with Scoundrels in Law: a witty, irreverent book that details the life and outrageous times of the law partnership of Howe and Hummel—quite possibly the most colorful one that ever was—and in the process gives a whirlwind tour of the Big Apple at the end of the 19th Century.

From the critically acclaimed author of Crazy '08 comes the thrilling true story of the most colorful and notorious law firm in American history. Scoundrels in Law offers an inside look at crime and punishment in the nineteenth century, and a whirlwind tour of the Gilded Age.

Gangsters and con men. Spurned mistresses and wandering husbands. Strippers and Broadway royalty. Cat killers and spiritualists. These were the friends and clients of Howe & Hummel, the most famous (and famously rotten) law firm in nineteenth-century America.

The partners gloried in their reputation and made a rich living from it. William Howe left London a step ahead of the law to find his destiny defending the perpetrators of murder and mayhem in post-Civil War New York, in an age of really good murders. A dramatic, diamond-encrusted presence, Howe was one of the great courtroom orators of his era, winning improbable acquittals time after time.

Abraham Hummel enjoyed a quieter but perhaps more fearsome notoriety, shaking down high society so well and so often that receiving an envelope with the law firm's name on it became almost a rite of passage.

The partners bestrode Gilded Age New York with wit and brio, and everyone from Theodore Roosevelt to Lola Montez had a part in their story. In Howe & Hummel's prime, it would not have been unusual to see a leading politician, a pickpocket, a Broadway star, a bank robber, and a socialite all crowded together into the waiting room of their offices, located conveniently across the street from the city jail.

Howe and Hummel were not particularly good men. They were perfectly ready—even eager—to lie, cheat, and bribe on behalf of their clients. They did stop short of murder, though, a principle that played a critical role when the famous firm imploded in a truly spectacular web of deceit gone wrong.

Through the windows of the dingy premises of Howe & Hummel, readers can glimpse the Gilded Age in all its grime and grandeur. Cait Murphy restores this once-famous duo to their rightful place in the pantheon of great American characters.

Cait Murphy is the author of Crazy '08: How a Cast of Cranks, Rogues, Boneheads, and Magnates Created the Greatest Year in Baseball History and has worked at Fortune, the Economist, and the Wall Street Journal Asia in Hong Kong. She lives in New York City.

1. Scoundrels in Law: The Trials of Howe and Hummel, Lawyers to the Gangsters, Cops, Starlets, and Rakes Who Made the Gilded Age

2. Scoundrels in Law: The Trials of Howe and Hummel, Lawyers to the Gangsters, Cops, Starlets, and Rakes Who Made the Gilded Age

3. Scoundrels in Law: The Trials of Howe and Hummel, Lawyers to the Gangsters, Cops, Starlets, and Rakes Who Made the Gilded Age

4. SCOUNDRELS IN LAW: THE TRIALS OF