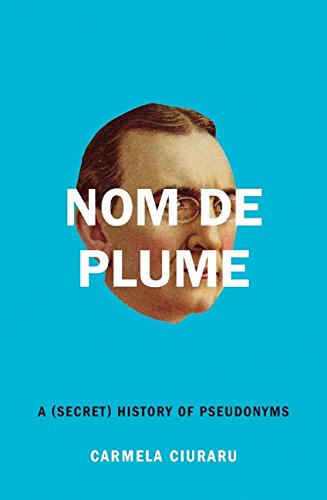 "Nom de Plume is a fascinating collection of stories - populated by individuals whose 'doubleness' is so distinct that they acquire secondary personalities, and, in some notable cases, multiple personalities.  It's a richly documented literary excursion into the inner, secret lives of some of our favorite writers."
- Joyce Carol Oates

"Nom de Plume uses the device of the pseudonym to unite the likes of
Charlotte Bronte, Mark Twain, Fernando Pessoa, and Patricia Highsmith
into a cohesive yet highly idiosyncratic literary history. Each page
affords sparkling facts and valuable insights onto the manufacturing
of books and reputations, the keeping and revealing of secrets, the
vagaries of private life and public opinion, and the eternally
mysterious, often tormented interface between life and literature."
---Elif Batuman, author of The Possessed: Adventures with Russian Books and the People Who Read Them

"What to make of the paradox that some of the boldest writers have hidden behind pen names?  Carmela Ciuraru has performed a valuable service in examining the phenomenon through her charming, sprightly, and illuminating biographical essays."
- Phillip Lopate

"This is a fascinating book on a fascinating subject. We all have other selves, but only some of us give them a name and let them loose in the world. Carmela Ciuraru steps behind a host of shadowy facades to interrogate the originals, and the result is both enlightening and wonderfully entertaining."
- John Banville, author of The Sea (winner of The Man Booker Prize)
"Nom de Plume is a delicious investigation of what leads the likes of the Brontës, Samuel Clemens, and Karen Blixen to ditch their names for safer, more romantic, or more intriguing identities when they write.  Whether their reasons are practical or mysterious, their lives and choices are here charmingly limned by Carmela Ciuraru (a name that, in itself, has the allure of a pseudonym)."
- Honor Moore, author of The Bishop's Daughter

What's in a name?
In our "look at me" era, privacy now seems a quaint relic. Everyone's a brand. Self-effacement is a thing of the past. Yet as Nom de Plume reminds us, it wasn't always like this.

Carmela Ciuraru explores the fascinating stories of more than a dozen authorial impostors across centuries and cultures, plumbing the creative process and the darker, often crippling aspects of fame.

Biographies have chronicled the lives of individual pseudonymous authors such as Mark Twain, Isak Dinesen, and George Eliot, but never before have the stories behind many noms de plume been collected into a single volume. These are narratives of secrecy, obsession, modesty, scandal, defiance, and shame.

A shy, half-deaf Victorian mathematician at Oxford felt free to let his imagination run wild only through the protective guise of Lewis Carroll.

The "three weird sisters" (as the poet Ted Hughes called them) from Yorkshire--the Brontës--produced instant bestsellers, transforming them into literary icons, yet they wrote under the cloak of male authorship. Emily and Anne were dead by the age of thirty, tragically never having achieved fame under their own names.

Bored by her aristocratic milieu, a cigar-smoking, cross-dressing Baroness rejected the rules of propriety by having sexual liaisons with men and women alike, publishing novels and plays as George Sand.

Grounded by research yet highly accessible and engaging, these provocative, astonishing stories reveal the complex motives of writers who hoarded secret identities--sometimes playfully, sometimes with terrible anguish and tragic consequences.

A wide-ranging exploration of pseudonyms both familiar and obscure, Nom de Plume is part detective story, part exposé, part literary history, and an absorbing psychological meditation on identity and creativity.

CARMELA CIURARU is not a pseudonym. Her anthologies include First Loves: Poets Introduce the Essential Poems That Captivated and Inspired Them (Scribner) and Solitude Poems (Alfred A. Knopf/Everyman's Library). She is a graduate of Columbia University's School of Journalism and a member of the National Book Critics Circle and PEN American Center. She has written for the Los Angeles Times, the San Francisco Chronicle, the Boston Globe, the Wall Street Journal, Newsday, Elle Decor, ARTNews, O, The Oprah Magazine, and other publications. You can visit her website at carmelaciuraru.com.

Book Description HarperCollins Publishers Inc. HC. Condition: New. A collection of biographical vignettes centred on literary figures since the 1900s who have written and published under pseudonyms. Explores their personal and writing lives and attempts to answer why each chose to write under an assumed name. Some had secrets to hide, or felt they had different identities, or they didn't wish to embarrass their families, or the list goes on. Seller Inventory # 65865