Items related to I Kissed an Earl (Pennyroyal Green Series) 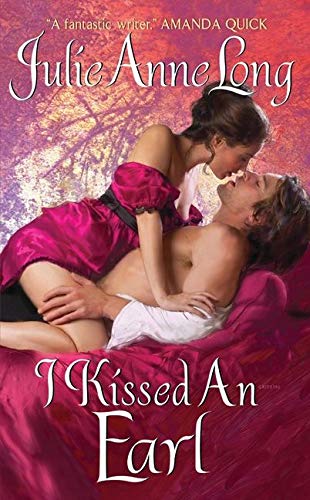 "Julie Anne Long reinvents the historical romance for modern readers, delivering intense, passionate characters and high adventure. Her writing glows."
--Amanda Quick
I Kissed an Earl is another installment in rapidly rising star Julie Anne Long's sensual and emotionally charged Pennyroyal Green series, centered around the longstanding feud of the wealthy Eversea and Redmond families of Pennyroyal Green, Sussex I Kissed an Earl absolutely brims with romance, adventure, and, of course, intense passion, as a beautiful, willful Regency lady searching for her lost brother stows away on a sailing ship--and ends up enchanting the vessel's highborn, hard-headed Captain.

Violet Redmond's family and fortune might be formidable and her beauty and wit matchless—but her infamous flare for mischief keeps all but the most lionhearted suitors at bay. Only Violet knows what will assuage her restlessness: a man who doesn't bore her to tears, and a clue to the fate of her missing brother. She never dreamed she'd find both with a man whose own pedigree is far from impeccable.

"Savage" is what the women of the ton whisper about the newly styled Earl of Ardmay—albeit with shivers of pleasure. Born an English bastard, raised on the high seas, he's on a mission to capture a notorious pirate for vengeance. But while Violet's belief in her brother's innocence maddens him, her courage awes him . . . and her sensuality finally undoes him. Now the man who once lost everything and the girl who has everything to lose are bound by a passion that could either end in betrayal . . . or become everything they ever dreamed.

USA Today bestselling author Julie Anne Long originally set out to be a rock star when she grew up (and she has the guitars and fringed clothing stuffed in the back of her closet to prove it), but writing was always her first love. Since hanging up her guitar for the computer keyboard, Julie has penned books that frequently top reader and critic polls and have been nominated for numerous awards, including the RITA®, Romantic Times Reviewer's Choice, and the Quill, and reviewers have been known to use words like "dazzling," "brilliant," and "impossible to put down" when describing them. Julie lives in Northern California.

8. I KISSED AN EARL (PENNYROYAL GRE