Items related to The Mask of Destiny (The Archer Legacy)

Newsome, Richard The Mask of Destiny (The Archer Legacy)

The Mask of Destiny (The Archer Legacy) 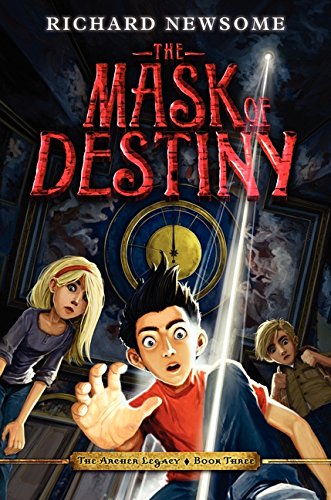 The life of Australian teen Gerald Wilkins changed forever when he inherited twenty billion pounds and a mystery to solve. In The Mask of Destiny, Gerald believes his enemy Sir Mason Green will be put in prison for murder. Instead, Gerald is accused of murder himself. He’ll have to find the last of three emerald caskets to clear his name. The search takes him, Ruby, Sam, and Mr. Fry to Paris, Rome, Athens, and Delphi. They discover Delphi once held the greatest treasure on earth. It could still be there, waiting to be found by someone good. Or evil...

Anthony Horowitz fans will love the extreme adventure, exotic locals, and illustrations in The Mask of Destiny, the rollicking conclusion to the Archer Legacy trilogy.

The final chapter of the Archer Legacy opens in the Central Criminal Court of the Old Bailey in London. Gerald, Sam, and Ruby are attending the murder trial of Sir Mason Green, hoping to see their longtime enemy put away for good. But just as the trial is about to begin, Mason Green is killed—and Gerald is framed for the murder. He only has one choice: to run.

Now he and his friends, along with Mr. Fry, are off on a quest to clear Gerald's name. Their journey will lead them across Europe in a race for the greatest and most powerful treasure ever assembled on earth—one that waits for someone, good or evil, to finally claim it.

Mysteries will be solved, friendships will be tested, and all secrets finally revealed in this, the last installment of Richard Newsome's pulse-pounding epic.

Richard Newsome is the author of the first two books in the Archer Legacy, The Billionaire's Curse and The Emerald Casket. In researching the trilogy, Richard traveled to England, India, France, Italy, and Greece, visiting many of the historical sites featured in the books. He lives with his family in Brisbane, Australia.

3. The Mask of Destiny (Archer Legacy)

4. The Mask of Destiny (The Archer Legacy)

5. THE MASK OF DESTINY (THE ARCHER