Items related to The Emerald Storm: An Ethan Gage Adventure 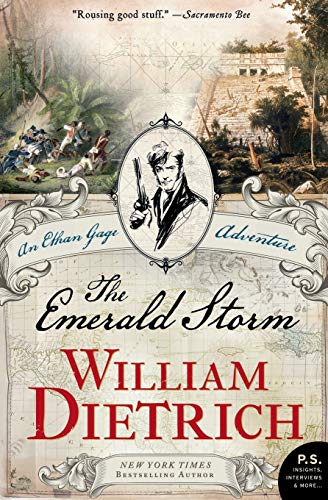 In the fifth installment of master storyteller William Dietrich’s bestselling adventure series, the swashbuckling, battle-scarred hero Ethan Gage must race from the slopes of the Alps to the sultry tropics of the Caribbean to pursue a mysterious Spanish treasure as the fate of England—and of the world’s first successful slave revolt—hang desperately in the balance.

The Emerald Storm is the action-packed historical masterpiece that Ethan Gage fans have long awaited. Fans of the Indiana Jones adventures, the Sharpe’s Rifles series, and the thrilling works of James Rollins, who himself calls Dietrich’s writing “adventure at its grandest,” will find The Emerald Storm a satisfying, sword-in-hand romp through history—and new readers will discover it as the perfect introduction to the breathtaking Ethan Gage Adventures.

The year is 1803. Swashbuckling, ribald, and irreverent hero Ethan Gage has outsmarted wily enemies and survived dangerous challenges across the globe, from the wilds of the American frontier to the pyramids of Egypt. Now the rakish hero finds himself in the Caribbean with his wife, Astiza, on a desperate hunt to secure the lost treasure of Montezuma—a legendary hoard rumored to have been hidden from Cortés's plundering Spanish conquistadors. Hot on his heels are British agents who want the gold to finance a black slave revolt in Saint-Domingue, robbing hostile France of its richest colony. The French, too, seek the treasure for the secrets it contains, the key to an incredible new means of invasion that can ensure Britain's defeat—on its own land.

Caught between the French and the rebel slave forces, Ethan and Astiza are in a race for gold and glory that will thrust them into the center of a bloody struggle for freedom as they try to rescue their son. And this time, Gage's luck may be running out.

Brilliantly combining science, history, mythology, and wit, William Dietrich has woven a larger-than-life tale that sees Ethan embroiled in the Napoleonic era's ideals, opportunism, and inventions, which gave rise to the modern world. Filled with intrigue, voodoo, a hurricane, violent political unrest, and unexpected passion, The Emerald Storm is Dietrich's most captivating work to date.

William Dietrich is the author of fourteen novels, including six previous Ethan Gage titles—Napoleon's Pyramids, The Rosetta Key, The Dakota Cipher, The Barbary Pirates, The Emerald Storm, and The Barbed Crown. Dietrich is also a Pulitzer Prize-winning journalist, historian, and naturalist. A winner of the PNBA Award for Nonfiction, he lives in Washington State.

3. The Emerald Storm (Paperback or Softback)