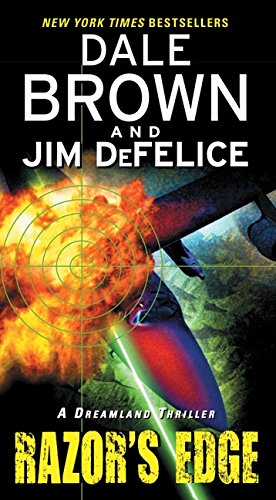 When America is in peril, America's top-guns must answer the call.

In the Nevada desert, the high-tech tools of tomorrow's wars are being conceived and tested at a top-secret military facility called Dreamland—where the impossible becomes reality.

The weapon is codenamed "Razor"—the brainchild of the brilliant minds at Dreamland—a mobile chemical laser system with a range of 600 kilometers, capable of downing anything that flies. The destruction of an American aircraft over Northern Iraq suggests the inexplicable and unthinkable: a vengeful foe now possesses the lethal technology. It is a fear that draws an old warrior out of retirement, and sends Dreamland's best pilots to the skies to determine what the enemy has and to help take it away from him. But politics threatens to crush a covert engagement that must be won in the air and on the ground, unleashing a devastating rain of friendly fire that could ultimately annihilate a nation's champions ... and perhaps Dreamland itself.

Jim DeFelice is the co-author, with former U.S. Navy SEAL Chris Kyle, of the multi-million-copy bestseller American Sniper, the source for Clint Eastwood’s film starring Bradley Cooper. His other books include Omar Bradley: General at War; Rangers at Dieppe; and West Like Lightning: The Brief, Legendary Ride of the Pony Express. He lives in upstate New York.

`Clancy's got serious company.'New York Daily News `When a former pilot turns his hand to thrillers you can take their authenticity for granted. His writing is exceptional and the dialogue, plots and characters are first-class... far too good to be missed.'Sunday Mirror `Brown puts us into the cockpits of wonderful machines and gives us quite a ride. His flying sequences are terrific ... authentic and gripping.'New York Times Book Review `You have to hug the seat when reading Dale Brown. The one-time US Air Force captain navigates his way at such a fearsome pace it is impossible to take your eyes off the page.'Oxford Times