Items related to War Room: The Legacy of Bill Belichick and the Art...

Holley, Michael War Room: The Legacy of Bill Belichick and the Art of Building the Perfect Team

War Room: The Legacy of Bill Belichick and the Art of Building the Perfect Team 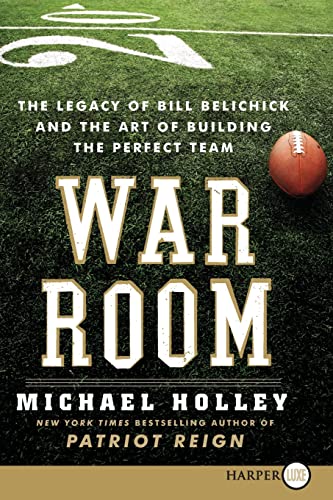 Bill Belichick is one of the titans of today’s game of football. Now, sports commentator and bestselling author Michael Holley follows three NFL teams—the New England Patriots, Kansas City Chiefs, and Atlanta Falcons—from training camp 2010 through the Super Bowl and into the April draft, opening a new window into Belichick’s influence on the game. This one-of-a-kind exploration takes football fans behind the scenes of the most popular sport in America, with unprecedented insider access to the head coaches, scouts, trainers, and players who make the game what it is—including new insights from Bill Parcells, Todd and Dick Haley, and Belichick himself. For true fans of the game, and for readers of Badasses, Patriot Reign, and Boys Will Be Boys, Holley’s War Room is not to be missed.

Football games aren’t won on Sundays in the fall. They’re won on draft day in the spring—in the war room.

Though they once worked together to create one of the greatest franchises in modern NFL history, these three master strategists are now competitors. Belichick continues at the helm of the New England Patriots, while Pioli heads the Kansas City Chiefs and Dimitroff runs the Atlanta Falcons. Yet still they share a common goal: building the perfect team, one draft pick and one trade at a time.

War Room is packed with never-been-told anecdotes as well as new insights from team officials, players, coaches, and scouts, all leading to surprising and groundbreaking insights into the art of building a champion.

MICHAEL HOLLEY is the author of the New York Times bestsellers Patriot Reign, Never Give Up (with Tedy Bruschi), and Red Sox Rule. He was a Boston Globe sportswriter for ten years, and he is the cohost of The Big Show on Boston sports radio station WEEI. Holley lives in Cambridge, Massachusetts, with his wife and two sons.

1. War Room: The Legacy of Bill Belichick and the Art of Building the Perfect Team

2. War Room: The Legacy of Bill Belichick and the Art of Building the Perfect Team