Items related to Molly's Game: From Hollywood's Elite to Wall... 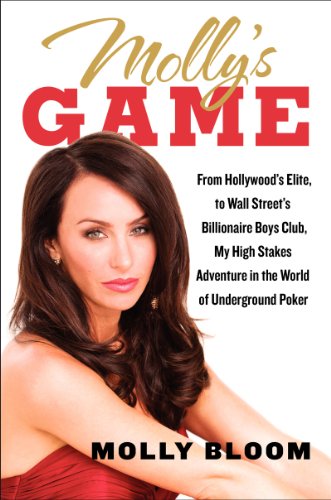 Molly Bloom reveals how she built one of the most exclusive, high-stakes underground poker games in the world—an insider’s story of excess and danger, glamour and greed.

In the late 2000s, Molly Bloom, a twentysomething petite brunette from Loveland Colorado, ran the highest stakes, most exclusive poker game Hollywood had ever seen—she was its mistress, its lion tamer, its agent, and its oxygen. Everyone wanted in, few were invited to play.

Hundreds of millions of dollars were won and lost at her table. Molly’s game became the game for those in the know—celebrities, business moguls, and millionaires. Molly staged her games in palatial suites with beautiful views and exquisite amenities. She flew privately, dined at exclusive restaurants, hobnobbed with the heads of Hollywood studios, was courted by handsome leading men, and was privy to the world’s most delicious gossip, until it all came crashing down around her.

Molly’s Game is a behind the scenes look at Molly’s game, the life she created, the life she lost, and what she learned in the process.

Her Place at the Table

When Molly Bloom was a little girl growing up in a small Colorado town, she watched her brothers win medals, ace tests, and receive high praise from everyone they met. Molly wanted nothing more than to bask in that glow a little herself, so she pushed herself too—as a student, as an athlete. She was successful but felt like she was always coming from behind. She wanted to break free, to find a life without rules and limits, a life where she didn't have to measure up to anyone or anything—where she could become whatever she wanted.

Molly wanted more, and she got more than she could have ever bargained for.

In Molly's Game, Molly Bloom takes the reader through her adventures running an exclusive high-stakes private poker game. Her clients ranged from iconic stars like Leonardo DiCaprio and Ben Affleck to politicians and financial titans so powerful they moved markets and changed the course of history. With rich detail, Molly describes a world that until now has been shrouded in glamour, privilege, and secrecy, one where she fearlessly took on the Russian and Italian mobs—until she met the one adversary she could not outsmart, even though she had justice on her side: the United States government.

Molly's Game is an incredible coming-of-age story about a young girl who rejected convention in pursuit of her version of the American dream. It's the story of how she gained—and then lost—her place at the table, and of everything she learned about poker, love, and life in the process.

Molly Bloom grew up in Loveland, Colorado. She attended the University of Colorado at Boulder, majoring in political science. For several years Molly organized one of the largest high-stakes poker games in the country. She currently lives in Los Angeles.