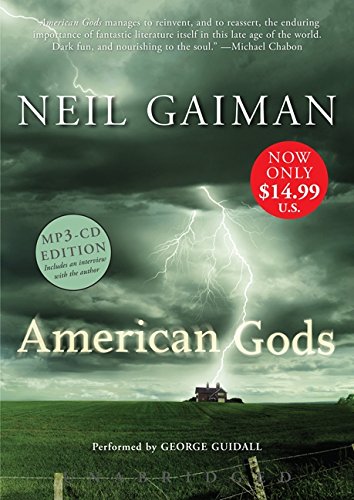 The bestselling author of Neverwhere returns with his biggest, most commercial novel yet―a tour de force of contemporary fiction

A master of inventive fiction, Neil Gaiman delves into the murky depths where reality and imagination meet. Now in American Gods, he works his literary magic to extraordinary results.

Shadow dreamed of nothing but leaving prison and starting a new life. But the day before his release, his wife and best friend are killed in an accident. On the plane home to the funeral, he meets Mr. Wednesday―a beguiling stranger who seems to know everything about him. A trickster and rogue, Mr. Wednesday offers Shadow a job as his bodyguard. With nowhere left to go, Shadow accepts, and soon learns that his role in Mr. Wednesday’s schemes will be far more dangerous and dark than he could have ever imagined. For beneath the placid surface of everyday life a war is being fought ―and the prize is the very soul of America.

Released from prison, Shadow finds his world turned upside down. His wife has been killed; a mysterious stranger offers him a job. But Mr. Wednesday, who knows more about Shadow than is possible, warns that a storm is coming -- a battle for the very soul of America ... and they are in its direct path.

One of the most talked-about books of the new millennium, American Gods is a kaleidoscopic journey deep into myth and across an American landscape at once eerily familiar and utterly alien. It is, quite simply, a contemporary masterpiece.

This Program requires an MP3-CD Player

Neil Gaiman is the #1 New York Times bestselling author of more than twenty books, including Norse Mythology, Neverwhere, and The Graveyard Book. Among his numerous literary awards are the Newbery and Carnegie medals, and the Hugo, Nebula, World Fantasy, and Will Eisner awards. Originally from England, he now lives in America.

George Guidall is one of the foremost narrators in the audiobook industry, having recorded over 500 unabridged books ranging from classics to contemporary bestsellers. He is the recipient of the 1999 Audie Award presented by the Audio Publishers Association for the best narration of unabridged fiction.

Book Description MP3 CD. Condition: New. MP3 CD. Shipping may be from our Sydney, NSW warehouse or from our UK or US warehouse, depending on stock availability. 0.263. Seller Inventory # 9780062314291