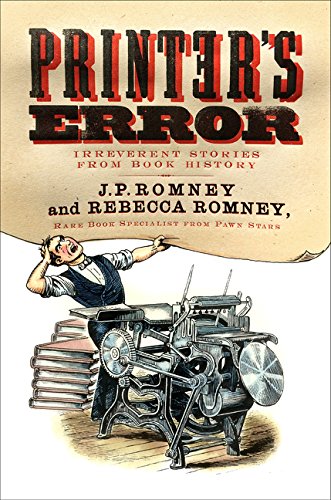 A funny and entertaining history of printed books as told through absurd moments in the lives of authors and printers, collected by television’s favorite rare-book expert from HISTORY’s hit series Pawn Stars.

Since the Gutenberg Bible first went on sale in 1455, printing has been viewed as one of the highest achievements of human innovation. But the march of progress hasn’t been smooth; downright bizarre is more like it. Printer’s Error chronicles some of the strangest and most humorous episodes in the history of Western printing, and makes clear that we’ve succeeded despite ourselves. Rare-book expert Rebecca Romney and author J. P. Romney take us from monasteries and museums to auction houses and libraries to introduce curious episodes in the history of print that have had a profound impact on our world.

Take, for example, the Gutenberg Bible. While the book is regarded as the first printed work in the Western world, Gutenberg’s name doesn’t appear anywhere on it. Today, Johannes Gutenberg is recognized as the father of Western printing. But for the first few hundred years after the invention of the printing press, no one knew who printed the first book. This long-standing mystery took researchers down a labyrinth of ancient archives and libraries, and unearthed surprising details, such as the fact that Gutenberg’s financier sued him, repossessed his printing equipment, and started his own printing business afterward. Eventually the first printed book was tracked to the library of Cardinal Mazarin in France, and Gutenberg’s forty-two-line Bible was finally credited to him, thus ensuring Gutenberg’s name would be remembered by middle-school students worldwide.

Like the works of Sarah Vowell, John Hodgman, and Ken Jennings, Printer’s Error is a rollicking ride through the annals of time and the printed word.

Rare book specialist Rebecca Romney and author J. P. Romney take us from monasteries and museums to auction houses and libraries to introduce curious episodes in the history of print.

Print history, like any history, is full of strange people and goings-on. The road paved by our civilization’s best books is a long and noble one, but it is also lined with unexpected potholes and sharp turns into what-the-hell-is-going-on-here territory. Illustrators talking to ghosts, maps bringing countries to their knees, Shakespeare writing awful plays, and Charles Dickens branding America a nation of filthy literary thieves all serve as the back alleys into which the authors could descend. Correction: into which the authors did descend.

Consider that today a Gutenberg Bible is the Holy Grail of book collecting. But that wasn’t always so. James Lennox, a New York millionaire, sent an agent to bid on his behalf at a London auction in 1847. At that point, no one had ever paid more than £215 for a Gutenberg Bible. His agent became embroiled in a bidding war and when the dust settled, Lennox was on the hook for an eye-popping £500. Lennox was so angry about the exorbitant sticker price that he flatly refused to pay it. Eventually he came around, which was clearly the right choice, since a Gutenberg Bible would sell for tens of millions of dollars today.

Among the many other tales told in Printer’s Error are the story of the man who coined the term “atlas”—who was also responsible for generations of Europeans believing that “Little People” inhabited the Arctic; the history of the “bad” versions of Shakespeare’s plays, including a Hamlet who sounds more like a drunken pirate than a prince; and the fate of William Tyndale, who made the Holy Bible accessible to countless worshippers—and was also burned at the stake for heresy.

J. P. and Rebecca Romney scoured five hundred years of book history and collected some of its most absurd episodes. And then like so many humans before them, they wrote a book about it.

Rebecca Romney’s appearances on the History Channel’s Pawn Stars have made her the country’s most recognizable rare book dealer. In her career, she has sold single volumes for $500,000, books from the libraries of Isaac Newton and Queen Elizabeth I, and more than one Shakespeare Folio.

J. P. Romney is a historical researcher and the author of the young adult novel The Monster on the Road Is Me.