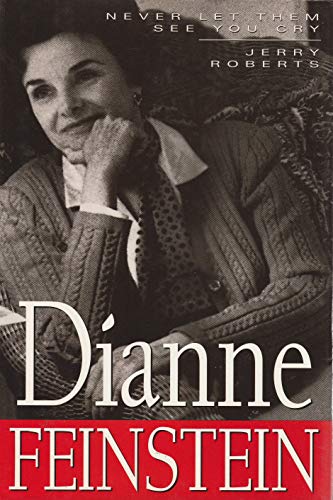 An unauthorized biography of Dianne Feinstein portrays a childhood of pain and privilege, her rise to power as mayor of San Francisco, the tragic Milk and Moscone slayings, and her successful campaign for the Senate in 1992

A veteran journalist offers a revealing portrait of the enigmatic woman and consummate political survivor whose rocky path to national prominence may well lead to the White House.

This competent biography of California senator Feinstein, who in November will be up for reelection, hews to the new archetype in political drama: It's the tale of the child who triumphs over the dysfunctions of family life and grows up to become an influential public figure. Roberts, editorial page editor of the San Francisco Chronicle, offers a tepid round-up of Feinstein's life and career. He sketches Feinstein's parents, a successful doctor and an abusive mother, and suggests that in childhood Feinstein learned to transform emotional pain into ambition. After Stanford, Dianne Goldman returned home to San Francisco in 1956, began learning politics, and eloped with lawyer Jack Berman. Divorced within three years, she raised a daughter, developed her political profile as a member of the state parole board for women, and found lasting love with neurosurgeon Bert Feinstein. In 1969, she won election to the San Francisco Board of Supervisors, casting her crusade--as throughout her career, the author notes aptly--``in terms that threatened neither men nor the status quo.'' Insecure and imperious, Democrat Feinstein gained a reputation as a ``paradoxical liberal'' (most notably by abandoning her opposition to the death penalty). In 1978 her husband died, San Francisco was rocked by the Jonestown tragedy, and Supervisor Dan White assassinated Mayor George Moscone and Supervisor Harvey Milk. Feinstein became acting mayor, and her stewardship lasted nine years, earning her a national reputation. She lost the 1990 race for governor to Pete Wilson but rebounded in 1992, when she was elected to fill out Wilson's uncompleted Senate term. She won on the strength of her campaign style, big spending, and the postAnita Hill ``Year of the Woman'' campaign of the Democratic National Committee. Though Feinstein once aspired to be president, she now says the Senate's high enough. Indeed, this book, though mainly respectful, should not garner her new acolytes. (8 pages b&w photos, not seen) ($50,000 ad/promo; author tour) -- Copyright ©1994, Kirkus Associates, LP. All rights reserved.