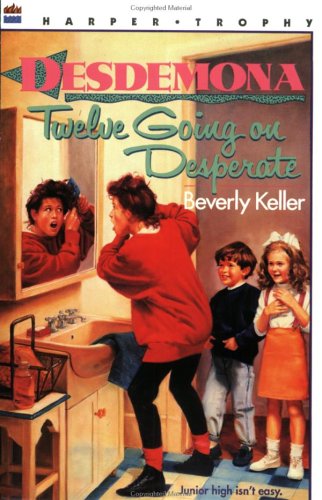 It's one disaster after another as Desdemona Blank tries to make friends at her new junior high, salvage her single-parent father's budding romance, and not think too much about Mike Harbinger, the fifteen-year-old blond school heartthrob. Then several extraordinary things happen'including getting to know Mike'and Desdemona's desperate life becomes a delirious one.

Beverly Keller's other books include No Beasts! No Children! and Fowl Play, Desdemona. She lives in Davis, Ca.

Grade 4-7 A perfect change of pace for Anastasia Krupnik fans. This sequel to No Beasts! No Children! (Lothrop, 1983) continues the soap opera dramatics of an articulate 12 year old caught in the throes of adolescence with her impoverished psychologist father, her 5-year-old twin brother and sister, and an opinionated housekeeper. Desdemona's family is threatened with eviction from their dilapidated cottage by her best friend Sherman's father, who is running for mayor. A bottle of varnish mislabeled as shampoo sets off a steady barrage of calamities in Desdemona's life, including a hilarious party scene in which she unwittingly serves dog food instead of pate to Sherman's father's political friends. Desdemona's wry one-liners are fresh without being overly cutesy; her life is zany and appealing. There's also some food for thought here about slumlords, image-conscious politicians, and true friends. Desdemona's trials and tribulations may well develop into an appealing series. Linda Wicher, Lincolnwood Public Lib . , Ill.
Copyright 1986 Reed Business Information, Inc.