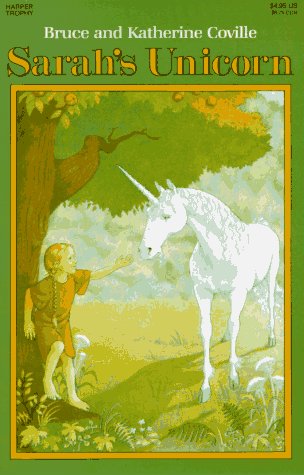 Although Sarah tries to keep her friendship with Oakhorn a secret, her wicked-witch aunt finds out and is determined to rob the unicorn of his magic. ‘Welcomes beginning readers to the world of fantasy in a story which is simple and direct, yet woven with moonbeams.’ —SLJ.

BRUCE COVILLE has been a teacher, a toymaker, a magazine editor, a gravedigger, and a cookware salesman. Additionally, he has published over 100 books for children and young adults, including the international bestseller My Teacher is an Alien, the four book Unicorn Chronicles series, and Jeremy Thatcher, Dragon Hatcher. In 2001 he created FULL CAST AUDIO, an audiobook company devoted to producing full cast, unabridged recordings of material for family listening. Much in demand as a speaker and storyteller, he has performed on five continents. KATHERINE COVILLE is an artist, a sculptor, and a dollmaker who once made a dollhouse inside an acorn. She has illustrated more than thirty books, including twenty by her husband Bruce, among them the Space Brat series, the Moongobble and Me series, and Goblins in the Castle. In 2015 she published her first novel, The Cottage in the Woods, which Publisher's Weekly called Clever, heartwarming fantasy and Booklist praised as A delightful, multidimensional narrative.

An effervescent story, make-believe at its best --Publisher's Weekly

Welcomes beginning readers to the world of fantasy in a story which is simple and direct, yet woven with moonbeams. --School Library Journal