Items related to Super Cluck (An I Can Read Book)

Super Cluck (An I Can Read Book) 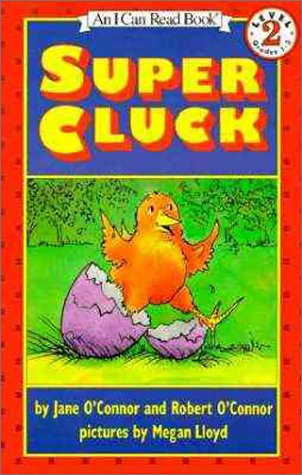 When he adopts an egg left behind on Earth by Chickens from the planet Nestron, Chuck proves that he is no dumb cluck when he defends the egg against a marauding rat. Reprint.

Jane O’Connor wrote this delightful tale in collaboration with her son Robert, now a sixth-grader. She has authored two previous I Can Read Books, Lulu and the Witch Baby and Lulu Goes to Witch School, as well as a middle-grade novel on the HarperCollins list, Just Good Friends. The O’Connors live in New York City.

Megan Lloyd is the illustrator of a number of picture books for HarperCollins, including The Little Old Lady Who was Not Afraid of Anything and, most recently, That Sky, That Rain. She resides in Carlisle, Pennsylvania, and is a founding member of, and art director for, the Children’s Literature Council of Pennsylvania.

Kindergarten-Grade 3-- A book written by a sixth grade boy, co-authored with his mother. Super Cluck is a chicken from outer space, accidently left on Earth as an egg, and adopted by the kind Mrs. Cluck. Soon after he hatches it becomes evident that Chuck Cluck has some unusual attributes--his large size, amazing strength, and ability to fly. Children attracted to "Super Hero" characters will delight in Super Cluck's story. Lloyd's bright watercolor-and-pen illustrations are often more detailed than the usual beginning-to-read fare; many of the chicken coop scenes are delightful. Readers will be awaiting the further adventures of this chick. Meanwhile, Robert and Super Cluck can serve as role models for aspiring young authors. --Gale W. Sherman, Pocatello Public Library, ID
Copyright 1991 Reed Business Information, Inc.