Items related to Knocked Out by My Nunga-Nungas: Further, Further Confessions...

Rennison, Louise Knocked Out by My Nunga-Nungas: Further, Further Confessions of Georgia Nicolson

Knocked Out by My Nunga-Nungas: Further, Further Confessions of Georgia Nicolson 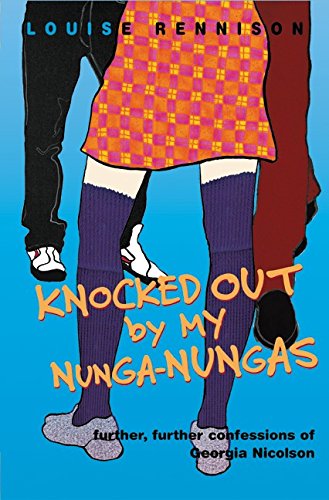 As I was going out of my bedroom door I remembered my nungas. Perhaps I should take some precautions to keep them under strict control. Maybe bits of Sellotape on the ends of them to keep them from doing anything alarming? I'd like to trust them, but they are very unreliable.

The irrepressible heroine of the Michael L. Printz Honor Book Angus, Thongs and Full-Frontal Snogging is back, and funnier than ever! Georgia has finally landed Robbie the Sex God, but he's never around, and Georgia's ex, Dave the Laugh, is starting to look quite dreamy. Strangely, so does just about every other guy Georgia meets, even the new French teacher.

In this third installment of Georgia's hilarious confessions, Georgia's "red bottomosity" is out of control! Whatever will happen next?

Louise Rennison was a British comedian and the internationally bestselling and award-winning author of the angst-filled Confessions of Georgia Nicolson series as well as the Misadventures of Tallulah Casey series. Her first novel, Angus, Thongs and Full-Frontal Snogging, received a Michael L. Printz Honor Award in 2001, was adapted into a feature film, and has become a worldwide bestseller now translated into 34 languages. She was also awarded the Roald Dahl Funny Prize for the first book in her Tallulah Casey series, Withering Tights.

Grade 8-10-The irreverent voice of Georgia Nicolson is loud and clear in this latest installment from Rennison. Now she is officially the "Girlfriend of a Sex God," and as she tries to settle into that role, she discovers that life is still no less confusing. After "snogging" an old flame, her fidelity might waver. Georgia is a fully fleshed out 15-year-old, preoccupied with herself, impatient with her father and all other authority figures, and mercurial in her attitudes. In other words, she's a girl filled with the insecurities that define adolescence. Readers are usually on her side even though her sensitivity toward others is often lacking. She is most consistently warm toward her little sister, Libby, and this relationship adds a pleasant dimension to her character. There are laugh-out-loud moments and her creative language throughout brings her diary to life. However, her repeated glib comments about lesbianism are unfortunate and unnecessary. Though they may be intended to add humor and honesty to the character and are perhaps reflective of attitudes characteristic of the age group, they do not serve the audience well. This point aside, the novel will no doubt find a wide readership. Rennison once again begins with an explanatory note to her "American chums," and appends a glossary to help them understand some of the British colloquial expressions and Georgia's unique vocabulary. While not much happens in this volume, it seems obvious that further episodes will follow.
Renee Steinberg, Fieldstone Middle School, Montvale, NJ
Copyright 2002 Reed Business Information, Inc.

1. Knocked Out by My Nunga-Nungas: Further, Further Confessions of Georgia Nicolson

2. Knocked Out by My Nunga-Nungas: Further, Further Confessions of Georgia Nicolson Rennison, Louise

3. Knocked Out by My Nunga-Nungas: Further, Further Confessions of Georgia Nicolson Rennison, Louise