Items related to Victor Six: The Saga of America's Youngest, Most...

Victor Six: The Saga of America's Youngest, Most Decorated Officer in Vietnam 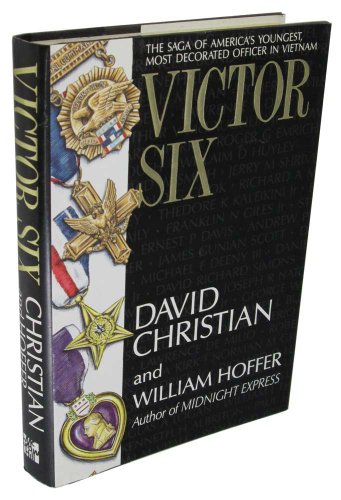 By the time he was 21, Christian had risen to the rank of Army captain in the American forces fighting in Vietnam and had amassed considerable experience leading a reconnaisance unit whose missions were guerilla warfare, harassment and interdiction. Though something of a rebel, he was also a brilliant leader, admired by the men in the platoon, which had been dubbed "Christian's Butchers." In due course, he was badly wounded and hospitalized, returned to combat and then was seriously burned by napalm. Returning to the U.S., he resumed his status as a warrior, this time fighting for Vietnam veterans' rights to education, job training and, above all, appreciation by their fellow citizens. Writing here with Hoffer ( Midnight Express ), Christian, now a business consultant, makes a strong case for the oft-maligned servicepeople who went to war in Vietnam simply because their government told them to--and his pleas for an understanding of what they have suffered will leave no reader indifferent. Photos.
Copyright 1990 Reed Business Information, Inc.

Written with Hoffer, coauthor of Billy Hayes's story in Midnight Express (LJ 4/15/77), this book is an account of Christian, the "Victor Six" of the title, and his unit during the Vietnam War. Utilizing unorthodox tactics, the unit successfully met the enemy time and again in the jungles of Vietnam and Cambodia. Wounded in action, Christian returned to the war only to be severely burned by napalm. This ended one war for him, and he returned home to wage another. While completing his college education and undergoing 33 operations for his wounds, Christian became an outspoken champion for veterans; in fact, he lost his veterans' affairs job with the Carter administration after a much-publicized speech. His book should appeal to the popular audience which is apparently its target.
- George F. Scheck, Naval Underwater Systems Ctr. Lib., Newport, R.I.
Copyright 1990 Reed Business Information, Inc.

1. Victor Six: The Saga of America's Youngest, Most Decorated Officer in Vietnam

2. Victor Six: The Saga of America's Youngest, Most Decorated Officer in Vietnam

3. Victor Six: The Saga of America's Youngest, Most Decorated Officer in Vietnam