Items related to A guide to everyday economic statistics

A guide to everyday economic statistics 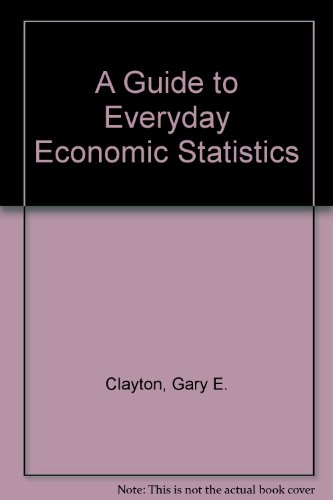 Ideal as a supplement for the freshman/sophomore principles of Economics course, or one-term survey of economics courses. An innovative, compact explanation of many of the most commonly used statistics that describe the U.S. economy (i.e. GNP, consumer Price Index, etc). Ideal as a supplement in the Principles of Economics course, or as a trade/reference book, this revision includes new statistical measures such as the new Economic Bulletin Board.

Gary E. Clayton is Professor and former Chair of the Economics & Finance Department at Northern Kentucky University. His Ph.D. in economics is from the University of Utah and he is the only American with an Honorary Doctorate from the People’s Friendship University of Russia (PFUR) in Moscow. He has appeared on numerous radio and television programs and for two years was a regular guest commentator on economic statistics for NPR’s Marketplace. In addition to his other writings and newspaper commentary, he has published five textbooks in the middle school, high school and college markets, including the best-selling Understanding Economics with McGraw-Hill Education. Professor Clayton’s web portal, www.EconSources.com, was described as “among the most useful [sites] on the web” by the Federal Reserve Bank of Boston’s Ledger.
Dr. Clayton has taught international business and economics to students in London, Austria, and Australia. He is interested in the economic advancement of developing nations and in 2006 helped organize a micro loan project in Uganda. He is a year 2000 Freedoms Foundation Leavey Award winner for Excellence in Private Enterprise Education, an Association of Real Estate License Law Officials (ARELLO) national Consumer Education Award winner, and the recipient of a national teaching award from the National Council on Economic Education. In 2005 Dr. Clayton was the recipient of Northern Kentucky University’s Frank Sinton Milburn Outstanding Professor Award.

1. A Guide to Everyday Economic Statistics