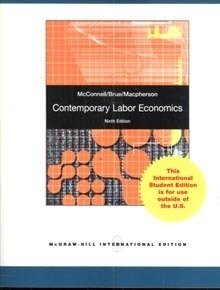 "Contemporary Labor Economics, 9e" presents the 'new' labour economics in a readable and logical fashion. The authors' focus in this edition is clearly on labour economics as an applied field of micro and macro theory. This volume is based on the assumption that labour economics is no longer an area tangential to the core of analytical economics but rather a critical component of that core. However, since traditional topics such as labour law, structure of unions, and collective bargaining also play an important role in labour markets, they are also presented. In the Ninth Edition, the authors deliver new and updated discussions of public policy issues and expanded and updated coverage of the current economic crisis.

Book Description PAPERBACK. Condition: New. Book Cover and ISBN may be different from US edition but contents as same US Edition. Excellent Quality,Quick delivery, We may ship the books from Asian regions for inventory purpose. Our courier service is not available at PO BOX. Seller Inventory # nt_9780070166752