Items related to The Recording Angel: Explorations in Phonography

The Recording Angel: Explorations in Phonography 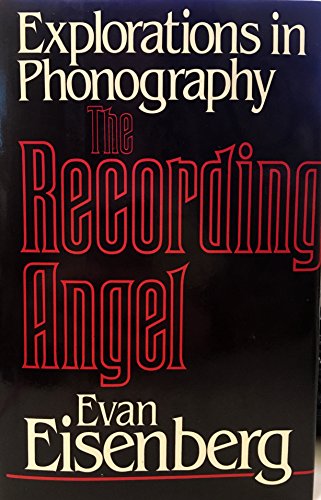 Examines the ways sound recording has changed the nature of music, discusses the influence of music on human behavior, and tells the stories of musicians and composers who have made sound recording an art form

Evan Eisenberg’s writings on music, culture, and technology have appeared in The New Republic, The Village Voice, The New Yorker, The Nation, and other periodicals. His most recent book is The Ecology of Eden.

A book that looks into the psychology and philosophy of the experience of listening to music on records, rather than just reviewing phonograph history, is an intriguing idea; and Eisenberg, a philosopher by training who writes on music and technology for a number of magazines, is ideally equipped to execute it. This study is almost too full of good things: bright perceptions abound on such questions as the difference between live listening, record listening and radio listening; on the nature of recorded music as a commodity; on the record-listening experience, solitary and social, with its various absurdities; andas becomes a philosopheron Platonic, even Marxist, concepts of the cultural context of canned music. Sometimes Eisenberg has so many thoughts going at once it's difficult to follow his flow, and the book is more loosely organized than it should be. But at his best, in a series of interviews with friends and acquaintances obsessed with recorded sound (he writes like a born novelist) or in a deeply intuitive look at the late Glenn Gould, his book cannot help but fascinate anyone with an ear for recorded music.
Copyright 1986 Reed Business Information, Inc.

1. The Recording Angel: Explorations in Phonography

2. The Recording Angel: Explorations in Phonography