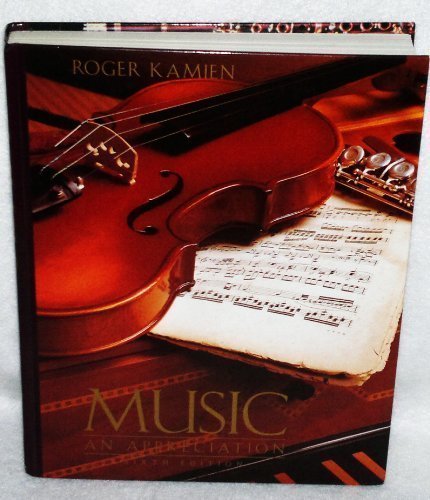 N-10: 0070340706 | ISBN-13: 978-0070340701 | Publication Date: October 1996 | Edition: 6th "Music: An Appreciation", sixth edition, is an exciting new revision of the most widely used text for the non-majors' introduction to music or music appreciation courses. Instructors have made Kamien's "Music: An Appreciation" the leading book because of its thorough coverage (including world music), because of its well-chosen examples (based on adopters' input), because of its unsurpassed supplements package (including multi-media software) and because of its easy-to-follow listening outlines (keyed to the recording packages). The sixth edition of this text offers 16 new listening outlines, reflecting current scholarship. The range of music discussed has been expanded. "Music: An Appreciation" includes broader coverage of music since 1950: music by women composers, baroque orchestra, the song cycle for voice and orchestra, jazz and American musical Theatre.

Roger Kamien received his B.A. in Musicology from Columbia and his M.A. and PhD. from Princeton. Kamien taught for 2 years at Hunter College and for 20 years at Queens College, where he coordinated the music appreciation courses. In 1983, he was appointed to the Zubin Mehta Chair in Musicology at The Hebrew University of Jerusalem. In addition to Music: An Appreciation, Prof. Kamien has written numerous articles and reviews, co-wrote A New Approach to Keyboard Harmony, and edited the Norton Scores. He is an accomplished pianist and, in recent years, has formed a two-piano team with his wife, Anita.