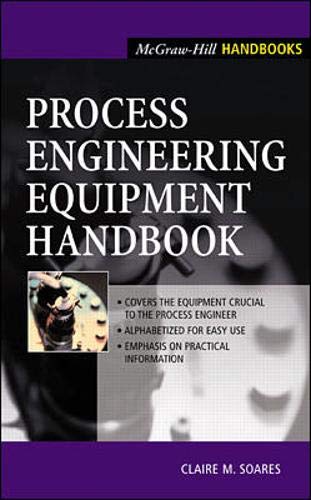 *Gives process engineers the key information they need to operate, troubleshoot, and maintain vital equipment in the chemical processing industry.


*Understand and specify all types of auxiliary process equipment and materials.
*Provide engineering and operating expertise on machinery that is of prime importance in process engineering, including compressors and pumps, gas and steam turbines, fans, blowers and motors—both as individual components and as part of a supplied total package.
*Explore various applications, such as mechanical drive and direct drive (power generation service) for gas turbines, major support systems including instrumentation, and key components such as bearings and seals, all with reference to practical applications.
*Troubleshoot and solve problems in unfamiliar machines and components
*Work effectively with control, environmental, mechanical, civil, and other technical specialists.
*Handle issues with filters, seals, fans, dryers, nozzles, gaskets, elements made of unusual materials, blowers, connectors, gas and steam turbines, conveyors, feeders, joints, mills, controls, and many other categories of process equipment.
*Gain valuable insight into the topics of vibration analysis and life-cycle assessment.
*Perform major and minor audits of existing plants and machinery trains.

CLAIRE SOARES is a registered professional engineer in Texas and Alberta, Canada and graduated with a B.Sc.Eng. and an M.B.A. in 1993. Her career began in computational fluid dynamics working for Brian Spalding in Imperial College, London, on the COBALT project. She then spent about two years working on developing structural patents for the marine and the power distribution industries in England and Canada. Her rotating machinery career began at Syncrude site in Fort McMurray, Alberta, in 1975. She later moved to Esso Resources and conventional oil and gas production until 1981. She then accepted a three-year commission with the Canadian Air Force as Propulsion Systems Manager for all transportation engines in the Department of Defence Transport Command in Canada. After that, she moved to the United States to start work as a senior engineer for Ryder Airline Services Division (ASD was also called Aviall and, before that, CooperAirmotive), where she ran technical support for 250 mechanics and their supervisors, and where she became manager of the V2500 engine repair program three years later. She is now an independent consultant, trainer, and writer and organizes one or two conference sessions annually for the International Gas Turbine Division of the American Society of Mechanical Engineers (ASME), where she is a Fellow.

PROCESS ENGINEERING EQUIPMENT HANDBOOK is her fourth book. The first, PROCESS PLANT MACHINERY, Second Edition, was coauthored by Heinz Bloch, P.E. This work and ENVIRONMENTAL TECHNOLOGY AND ECONOMICS: Sustainable Development in Industry helped provide the present handbook with its broad perspective. TURBOEXPANDERS AND PROCESS APPLICATIONS, her third book, also coauthored with Heinz Bloch, was released in 2001. All of her books are used when appropriate as course introduction material for her own and others' courses. Ms. Soares writes extensively for technical journals, such as PETROLEUM ECONOMIST, ASIAN ELECTRICITY, and INTERNATIONAL POWER GENERATION.

Book Description McGraw-Hill Professional 2001-12-26, 2001. Hardcover. Condition: Very Good. Item is in very good condition. If supplemental codes/CDs for textbooks are required please contact us prior to purchasing as they may be missing. Seller Inventory # DS-007059614X-2