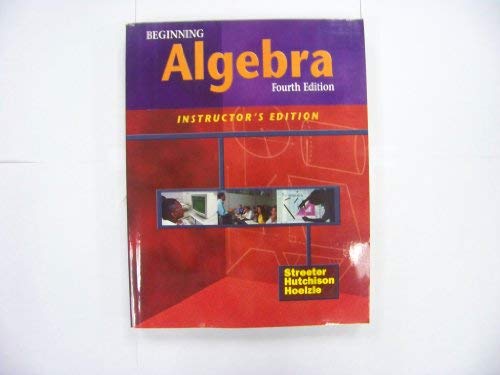 Beginning Algebra, 7/e by Baratto/Bergman is part of the latest offerings in the successful Streeter-Hutchison Series in Mathematics. The seventh edition continues the hallmark approach of encouraging the learning of mathematics by focusing its coverage on mastering math through practice. This worktext seeks to provide carefully detailed explanations and accessible pedagogy to introduce basic algebra skills and put the content in context. The authors use a three-pronged approach (I. Communication, II. Pattern Recognition, and III. Problem Solving) to present the material and stimulate critical thinking skills. Items such as Math Anxiety boxes, Check Yourself exercises, and Activities represent this approach and the underlying philosophy of mastering math through practice. The exercise sets have been expanded, organized, and clearly labeled. Vocational and professional-technical exercises have been added throughout. Repeated exposure to this consistent structure should help advance the student’s skills in relating to mathematics. The book is designed for a one-semester beginning algebra course and is appropriate for lecture, learning center, laboratory, or self-paced courses. It is accompanied by numerous useful supplements, including McGraw-Hill’s online homework management system, MathZone.

Don began teaching in a preschool while he was an undergraduate. He subsequently taught children with disabilities, adults with disabilities, high school mathematics, and college mathematics. Although each position offered different challenges, it was always breaking a challenging lesson into teachable components that he most enjoyed.

It was at Clackamas Community College that he found his professional niche. The community college allowed him to focus on teaching within a department that constantly challenged faculty and students to expect more. Under the guidance of Jim Streeter, Don learned to present his approach to teaching in the form of a textbook. Don has also been an active member of many professional organizations. He has been president of ORMATYC, AMATYC committee chair, and ACM curriculum committee member. He has presented at AMATYC, ORMATYC, AACC, MAA, ICTCM, and a variety of other conferences.

Above all, he encourages you to be involved, whether as a teacher or as a learner. Whether discussing curricula at a professional meeting or homework in a cafeteria, it is the process of communicating an idea that helps one to clarify it.

Stefan began teaching math and science in New York City middle schools. He also taught math at the University of Oregon, Southeast Missouri State University, and York County Technical College. Currently, Stefan is a member of the mathematics faculty at Clackamas Community College where he has found a niche, delighting in the CCC faculty, staff, and students. Stefan’s own education includes the University of Michigan (BGS, 1988), Brooklyn College (CUNY), and the University of Oregon (MS, 1996).

Stefan is currently serving on the AMATYC Executive Board as the organization’s Northwest Vice President. He has also been involved with ORMATYC, NEMATYC, NCTM, and the State of Oregon Math Chairs group, as well as other local organizations. He has applied his knowledge of math to various fi elds, using statistics, technology, and web design. More personally, Stefan and his wife, Peggy, try to spend time enjoying the wonders of Oregon and the Pacifi c Northwest. Their activities include scuba diving, self-defense training, and hiking.

Barry has enjoyed teaching mathematics to a wide variety of students over the years. He began in the fi eld of adult basic education and moved into the teaching of high school mathematics in 1977. He taught high school math for 11 years, at which point he served as a K-12 mathematics specialist for his county. This work allowed him the opportunity to help promote the emerging NCTM standards in his region.

In 1990, Barry began the next portion of his career, having been hired to teach at Clackamas Community College. He maintains a strong interest in the appropriate use of technology and visual models in the learning of mathematics.

Throughout the past 32 years, Barry has played an active role in professional organizations. As a member of OCTM, he contributed several articles and activities to the group’s journal. He has presented at AMATYC, OCTM, NCTM, ORMATYC, and ICTCM conferences. Barry also served 4 years as an offi cer of ORMATYC and participated on an AMATYC committee to provide feedback to revisions of NCTM’s standards.

Book Description McGraw-Hill College, 1997. Paperback. Condition: Good. Connecting readers with great books since 1972. Used books may not include companion materials, some shelf wear, may contain highlighting/notes, may not include cdrom or access codes. Customer service is our top priority!. Seller Inventory # S_273880722

Book Description Condition: Good. The item shows wear from consistent use, but it remains in good condition and works perfectly. All pages and cover are intact (including the dust cover, if applicable). Spine may show signs of wear. Pages may include limited notes and highlighting. May NOT include discs, access code or other supplemental materials. Seller Inventory # 31UE34003G8E_ns

Book Description McGraw-Hill Companies, The. Paperback. Condition: Very Good. A copy that has been read, but remains in excellent condition. Pages are intact and are not marred by notes or highlighting, but may contain a neat previous owner name. The spine remains undamaged. At ThriftBooks, our motto is: Read More, Spend Less. Seller Inventory # G0070632766I4N00

Book Description McGraw-Hill College, 1997. Condition: Good. A+ Customer service! Satisfaction Guaranteed! Book is in Used-Good condition. Pages and cover are clean and intact. Used items may not include supplementary materials such as CDs or access codes. May show signs of minor shelf wear and contain limited notes and highlighting. Seller Inventory # 0070632766-2-4