Items related to To Be Equal

Young, Whitney M. To Be Equal 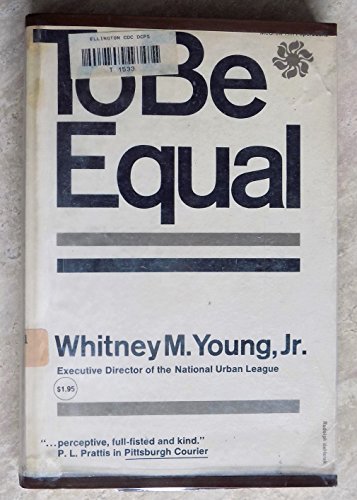 This book will have meaning and value for you, the reader, only if you recognize certain basic facts: First-The conditions and grievances to which Negro citizens are addressing themselves are real. It is a fact that a wide economic, social, and educational gap separates the majority of Negro citizens from other Americans. In all the major urban centers of the nation Negro citizens are con- signed and confined, but not resigned. They are consigned to minimal jobs, inadequate education, health, and welfare facilities; they are confined to urban ghettos where their housing is substandard and they are exposed to vicious antisocial influences. But the Negro citizen in 1964 is definitely not resigned to accepting these conditions. Second-Most Americans now recognize that this is no longer a regional problem. Today the challenge of civil rights exists not only in Alabama and Mississippi, Arkansas and Georgia, but in every major urban center in the nation. It is acute in each and every Harlem in our land, whether in New York, Chicago, Detroit, Cleveland, Los Angeles, or scores of other cities both north and south. In unemployment, housing, schooling, availability and adequacy of health and welfare services, the Negro family suffers drastically and out of proportion to its numbers. In northern ghettos hundreds of thousands of Negro citizens are struggling beneath the burden of unemployment and the mounting penalties imposed by automation; they are wrestling with the grinding, stunting effects of overcrowding in their incarceration. And they are subjected to the amorphous, gnawing attrition of subtle discrimination. Weekly their condition grows progressively worse because of continued Negro crowding into the urban centers, white flight to the suburbs, and intensification rather than alleviation of their difficulties. They are reaching the breaking point. Third-The drive for civil rights is determined; it is dedicated; it is deep-root