Items related to A Child's World 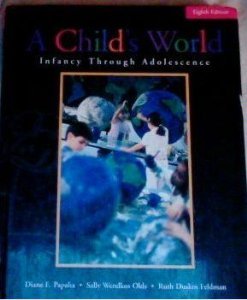 "A Child's World" is an accessible, applied, chronologically organized text for the child development course. This update builds on the ninth edition's streamlined coverage, offering the most cutting-edge research and a completely revised supplements package.

Diane E. Papalia As a professor, Diane E. Papalia has taught thousands of undergraduates at the University of Wisconsin-Madison. She received her bachelor’s degree, majoring in psychology, from Vassar College and both her master’s degree in child development and family relations and her Ph.D. in life-span developmental psychology from West Virginia University. She has published numerous articles in such professional journals as Human Development, International Journal of Aging and Human Development, Sex Roles, Journal of Experimental Child Psychology and Journal of Gerontology. Most of these papers have dealt with her major research focus, cognitive development from childhood through old age. She is especially interested in intelligence in old age and factors that contribute to the maintenance of intellectual functioning in late adulthood. She is a Fellow in the Gerontological Society of America. She is the coauthor, with Sally Wendkos Olds and Ruth Duskin Feldman, of A Child's World, now in its eighth edition; of Psychology with Sally Wendkos Olds; and of Adult Development and Aging, with Cameron J. Camp and Ruth Duskin Feldman.

Sally Wendkos Olds is an award-winning professional writer who has written more than 200 articles in leading magazines and is the author or coauthor of six books addressed to general readers in addition to the three textbooks she has coauthored with Dr. Papalia. Her book The Complete Book of Breastfeeding , a classic since its publication in 1972, was reissued in 1999 in a completely updated and expanded edition; more than 2 million copies are in print. She is also the author of The Working Parents’ Survival Guide and The Eternal Garden: Seasons of Our Sexuality and the coauthor of Raising a Hyperactive Child (winner of the Family Service Association of America National Media Award) and Helping Your Child Find Values to Live By. She has spoken widely on the topics of her books and articles to both professional and lay audiences, in person and on television and radio. She received her bachelor's degree from the University of Pennsylvania, where she majored in English literature and minored in psychology. She was elected to Phi Beta Kappa and was graduated summa cum laude.

Ruth Duskin Feldman is an award-winning writer and educator. With Diane E. Papalia and Sally Wendkos Olds, she coauthored the fourth and seventh editions of Human Development and the eighth edition of A Child's World. She also is coauthor, with Dr.Papalia and Cameron J. Camp, of Adult Development and Aging. A former teacher, she has developed educational materials for all levels from elementary school through college and has prepared ancillaries to accompany the Papalia-Olds books. She is author or coauthor of four books addressed to general readers, including Whatever Happened to the Quiz Kids? Perils and Profits of Growing Up Gifted. She has written for numerous newspapers and magazines and has lectured extensively and made national and local media appearances throughout the United States on education and gifted children. She received her bachelor's degree from Northwestern University, where she was graduated with highest distinction and was elected to Phi Beta Kappa.

1. A Child's World: Infancy Through Adolescence

Book Description McGraw-Hill Publishing Co., 1993. Condition: Fair. This is an ex-library book and may have the usual library/used-book markings inside.This book has soft covers. In fair condition, suitable as a study copy. Please note the Image in this listing is a stock photo and may not match the covers of the actual item,1350grams, ISBN:9780071129138. Seller Inventory # 6825300

2. A CHILD'S WORLD: INFANCY THROUGH ADOLESCENCE