Items related to Don't Ask What I Shot: How President Eisenhower’s... 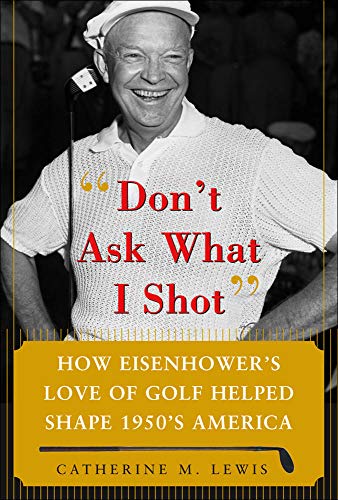 “Golf . . . is a sport in which the whole American family can participate--fathers and mothers, sons and daughters alike. It offers healthy respite from daily toil, refreshment of body and mind.”
--President Dwight D. Eisenhower

On January 24, 1953, four days after his inauguration, the New York Times reported that President Dwight D. Eisenhower had been spotted on the White House lawn practicing his short irons in the direction of the Washington Monument. This image of “The Golfing General” was one that the American public quickly became accustomed to, as Eisenhower is said to have played nearly 800 rounds during the course of his two-term presidency. He befriended the game's most beloved players, including Arnold Palmer, Ben Hogan, and Byron Nelson, and was the subject of hundreds of golf jokes and cartoons.

The public's awareness of Eisenhower's obsession with golf led directly to the sport's mid-century surge in popularity. In Don't Ask What I Shot, noted historian Catherine M. Lewis offers a unique alternate portrait of Ike and this watershed period in American history.

“Any time you have a person in the position of President Eisenhower, who was so enthusiastic about golf and had the press paying attention to his many excursions on the golf course, it was going to make people aware of the game and how much he enjoyed playing it.”
--Arnold Palmer

"Don't Ask What I Shot is a fascinating examination of one of golf's pivotal decades, and the remarkable president who did more to popularize the game than any other in history."
-Mark Frost, award-winning author of Grand Slam and The Greatest Game Ever Played

"Whatever remained to be done to remove the last traces of the average man's carefully nurtured prejudice against a game originally linked with the wealthy and aloof was done by President Eisenhower."
--Herbert Warren Wind, renowned golf writer

Catherine M. Lewis is an associate professor of history at Kennesaw State University and a curator and special projects coordinator at the Atlanta History Center. She has curated more than thirty exhibitions and has authored or coauthored six books. She holds a B.A. in English and History from Emory University and an M.A. and Ph.D. in American Studies from the University of Iowa.

Historian Lewis (Considerable Passions) takes an extremely thorough if not always entertaining approach to a combined study of golf in America and Eisenhower's stamp on history. She includes fascinating stories of how during WWII General Eisenhower ordered an air force pilot to drop a bomb on a new army golf course in Italy to quickly dig a hole for a sand trap, and how as president he took to the links with not only golf clubs but a "doomsday" briefcase that held the codes to launch a nuclear attack. Eisenhower used golf as a way to relax from stress and as recuperative exercise after his first heart attack in 1955. Lewis explores how Eisenhower often directed national policy from fairways and clubhouses, including Little Rock's Central High School integration standoff and the response to the American spy plane crash in the Soviet Union. Lewis's narrative sometimes lags with an abundance of unnecessary details such as frequent lists of names of Eisenhower's golfing partners. She ultimately ranks Eisenhower with Bobby Jones and Arnold Palmer (both of whom the president befriended) as well as Tiger Woods as the most influential figures in popularizing the game in America. (May)
Copyright © Reed Business Information, a division of Reed Elsevier Inc. All rights reserved.