Classic Cases in Medical Ethics: Accounts of Cases That Have Shaped Medical Ethics, with Philosophical, Legal, and Historical Backgrounds 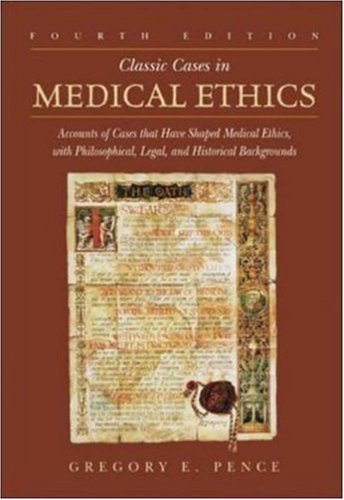 This rich collection, popular among teachers and students alike, provides an in-depth look at major cases that have shaped the field of medical ethics. The book presents each famous (or infamous) case using extensive historical and contextual background, and then proceeds to illuminate it by careful discussion of pertinent philosophical theories and legal and ethical issues.

Gregory Pence is one of the pioneering bioethicists of America. Having taught for thirty years in a medical school, he has seen many past prophecies of doom fail. He is optimistic about biotechnology.

He is internationally famous for defending cloning and genetically modified food against bioLuddites who oppose research on stem cells and cloning. Because of his views, his talks have been picketed by Greenpeace and anti-cloning zealots.

His Classic Cases in Medical Ethics: Accounts of the Cases that Shaped Medical Ethics, 4th ed., 2003, is one of the standard textbooks of bioethics. His Who's Afraid of Human Cloning? (1998) is already regarded as a classic in bioethics for its rigorous attack on opponents of cloning. His Cloning After Dolly: Who's STILL Afraid of Human Cloning? will appear in late 2004. His Designer Food: Mutant Harvest or Breadbasket of the World? won a Choice Outstanding Academic Title in 2003.

He doesn't think the sky will fall if a cloned baby is born. In opposing laws against cloning, he was asked to testify in 2001 before Congress and in 2002 before the California Senate.

Constantly in demand for national television, Pence has been interviewed on Bobby Battista's "Talk Back Live" with Bobby Battista, "The Point" with Gretta von Susteren on CNN, "The Early Show with Bryant Gumbel" on CBS, "Wolf Blitzer's Washington" on CNN, as well as on National Public Radio's "Marketplace" and its "Weekend Edition." He has also been interviewed by TIME magazine, the New York Times, and most national publications. He has published in Newsweek, the New York Times, and the Wall Street Journal.

Pence has given the Soundings Lecture at Castleton State College, VT, the Thornton Lecture at Alma College, MI, the Seidman Trust Lecture at Rhodes College, TN, and the Hughes Memorial Lecture at West Liberty State College in WVA. He has talked at Princeton, Yale, and Stanford. He has given keynote talks about cloning at universities in Portugal, London, Switzerland, and Australia.

Pence teaches at the medical school at the University of Alabama in Birmingham (UAB), where he also directs a program for gifted undergraduates pre-admitted to UAB medical school. There, he has been voted Best Teacher.

1. Classic Cases in Medical Ethics: Accounts of Cases That Have Shaped Medical Ethics, with Philosophical, Legal, and Historical Backgrounds

2. Classic Cases in Medical Ethics: Accounts of Cases That Have Shaped Medical Ethics, with Philosophical, Legal, and Historical Backgrounds

3. Classic Cases in Medical Ethics: Accounts of Cases That Have Shaped Medical Ethics, with Philosophical, Legal, and Historical Backgrounds