Items related to A History of Russia: Since 1855, Volume II

Moss, Walter A History of Russia: Since 1855, Volume II 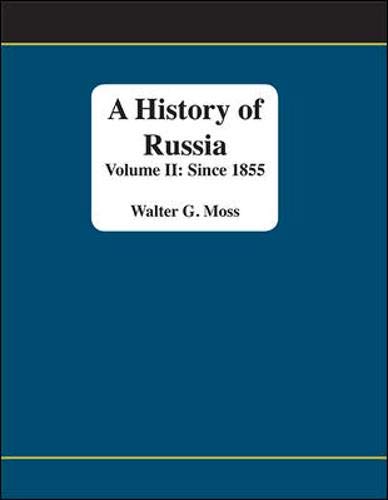 This is the second volume of a two-volume text that focuses on three main topics: the struggle for and against political authority, the expansion and contraction of Russia and its dealings with non-Russian nationalities and foreign powers, and the life and culture of the Russian people. This approach contributes to the book's stress on the continuities in Russian history from its beginnings to the mid 1990's. The text provides a balanced and comprehensive coverage of political, economic, social, cultural, and intellectual history.

Distinctions · A two-volume format, with the material on Late Imperial Russia appearing in both volumes. · Incorporates the latest scholarly findings and briefly mentions scholarly controversies. · A clear overview stressing main themes is offered at the beginning of each historical period and the beginning of each chapter. · Chapters are organized in a chronological/topical manner and written in a clear style interweaving narrative and analysis. · Offers greater treatment of such topics as nationalities issues, political opposition, women, eating and drinking, health and sickness, law, crime and punishments, and popular culture. · Much stronger coverage of social history than its competitors. · Extensive and current list of sources at the end of each chapter. A more general source list at the end of each volume includes references to media sources and internet sources. · Primary source inserts drawn from memoirs, letters, foreign observers accounts, and Soviet dissident literature are all included in each chapter.

Walter Moss is Professor of History at Eastern Michigan University, where he has taught history since 1970. He attended Xavier University in Cincinnati and received his Ph.D. from Georgetown University. He is the author of A History of Russia, 2 vols. (2nd ed.: 2002-2005) and Russia in the Age of Alexander II, Tolstoy, and Dostoevsky. He is co-editor along with Terry and Upshur of The Twentieth Century: Readings in Global History. He also co-authored Growing Old and edited Humanistic Perspectives on Aging. He has written over 100 book reviews and several articles on Russian history, literature, and philosophy and has traveled on many occasions to Russia, the former Soviet Union, and other parts of Europe. He is currently working on a book on the major global changes of the twentieth century.