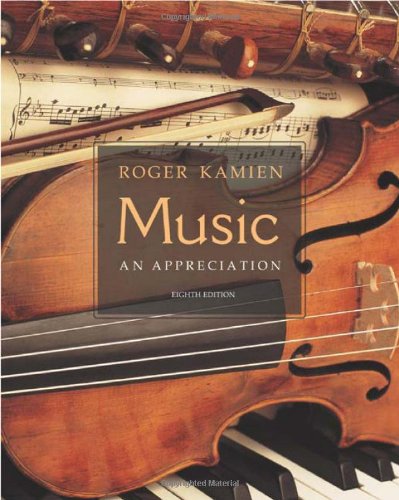 Through seven editions, Roger Kamien's Music: An Appreciation has become the most widely used text for Music Appreciation and Introduction to Music Literature courses. The author has approached his new eight edition with the goal of re-examining the scholarship and refreshing the repertoire while maintaining the strengths that have made the book number one - the clear presentation of musical elements, the vivid depiction of music history, the carefully chosen musical examples, the detailed and informative Listening Outlines, and the unsurpassed supplements package.

Roger Kamien received his B.A. in Musicology from Columbia and his M.A. and PhD. from Princeton. Kamien taught for 2 years at Hunter College and for 20 years at Queens College, where he coordinated the music appreciation courses. In 1983, he was appointed to his current position. In addition to Music: An Appreciation, Prof. Kamien has written numerous articles and reviews, co-wrote A New Approach to Keyboard Harmony, and edited the Norton Scores. He is an accomplished pianist and, in recent years, has formed a two-piano team with his wife, Anita.