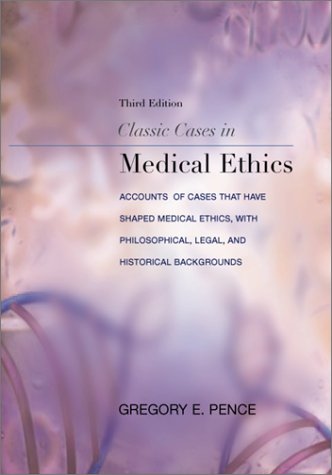 This rich collection provides an in-depth look at major cases that have defined and shaped the field of medical ethics. Popular among teachers and students alike, it contains more detail than most casebooks and enriches each famous (or infamous) case with extensive historical and contextual background. Each case is illuminated by careful discussion of pertinent philosophical theories and legal and ethical issues. Classic Cases in Medical Ethics is also a natural complement to Pence's Classic Works In Medical Ethics. A brand-new chapter 1 provides an overview of ethical theories and moral reasoning, discusses common mistakes in moral reasoning, and gives an historical overview of ethical theories and medical ethics. The focus of Chapter 4, Physician-Assisted Dying, has been changed from Dr. Kevorkian to Oregon’s legalization. Chapter 5 on assisted reproduction now goes far beyond baby Louise Brown’s in vitro fertilization and discusses up-to-date issues such as egg donation, choice of embryos, and the possibility of human cloning.

Gregory E. Pence earned his doctoral degree in 1974 from New York University. Since 1976, he has taught at the University of Alabama at Birmingham, where he is a Professor and a medical ethicist in the Department of Philosophy and School of Medicine In 1994 he was voted the Ingall’s award, the university’s highest teaching honor. His courses provide physicians and others with a broad background of the history of ethical issues in medicine since World War II. He has also edited a companion volume to CLASSIC CASES IN MEDICAL ETHICS entitled CLASSIC WORKS IN MEDICAL ETHICS (1997). He has coauthored SEVEN DILEMMAS IN WORLD RELIGIONS with Lynn Stephens (1995) and “Why Physicians Should Help the Dying,”, H. LaFollette (ed.) PRACTICAL ETHICS (Blackwell, 1997) For over a decade, he served on the Institutional Review Board on human experimentation. He is a past Chair of the Board for Birmingham AIDS Outreach. He has published in the American Journal of Medicine, Bioethics, Journal of Medical Ethics, Journal of the American Medical Association, American Philosophical Quarterly, Canadian Journal of Philosophy, American Medical News and the Journal of the American Board of Family Practice. He has written Op-Ed pieces for the New York Times, Newsweek, and the Wall Street Journal, and Ridder Newspapers. He has twice won teaching awards, and he has given many talks on bioethics in places that include China and Israel.