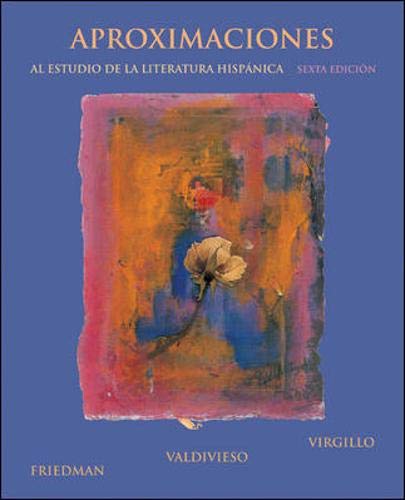 More than just an anthology of Spanish and Spanish American literature, Aproximaciones is also an introduction to literary analysis. Organized by genres (prose, poetry, drama, and the essay), it provides a rich and diverse array of reading selections. Each section is accompanied by an introduction and exercises. For the Introduction to or Survey of Peninsular and Latin American Literature courses.

Carmelo Virgillo (Ph.D , Indiana University, Bloomington) is Professor Emeritus of Romance Languages at Arizona State University, Tempe, where he taught Spanish, Portuguese, and Italian at the undergraduate and graduate levels from 1965 to 1993. In addition to serving as coordinator of Portuguese and Hispanic literature, he directed Arizona State University's programs in Florence and Siena, Italy (1982 and 1990). He was also book review editor of the Latin American Digest. His publications include Correspondência de Machado de Assis com Magalhães de Azeredo (Rio de Janeiro, Brazil: Instituto Nacional do Livro Ministério da Educação y Cultura, 1969), Woman as Myth and Metaphor in Latin American Literature with Naomi E. Lindstrom (Columbus University of Missouri Press, 1985), and Blbliografía analítico-descritiva de Henriqueta Lisboa (Rio de Janeiro: José Olympia Editora, 1992). He also authored and co-authored numerous articles and essays on nineteenth- and twentieth-century Spanish, Spanish-American, and Brazilian literature. In addition, he was a contributor to the Suplemento literário do Minas Gerais (Belo Horizonte, MG, Brazil). The recipient of several nominations for excellence in teaching, he has been cited by the Italian Ministry of Education for his career-long development of and contributions to the promotion of Italian studies in the United States. He is currently researching a new book on Hispanic civilization.