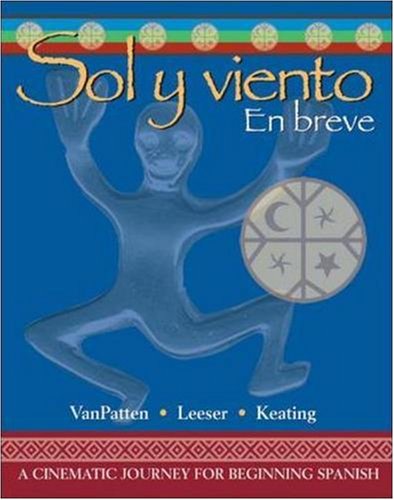 Sol y viento: En breve is an exciting new film-based introductory Spanish program that seamlessly integrates the feature-length film Sol y viento into the instructional and learning experience for both students and instructors. This brief version of Sol y viento: Beginning Spanish (McGraw-Hill, 2005) presents a briefer text that is easily managed for programs with fewer contact hours or as an intensive high beginner course.

The movie Sol y viento, created specifically for beginning language learners, was filmed on location in Chile, Mexico, and the United States. The film tells the story of a Chilean family and their winery, threatened by internal deception and external corporate development. A young U.S. Latino businessman finds himself intricately involved with the family and its winery as his company tries to buy their land. Later, as he rediscovers the past he fought to put behind him, he begins to question his own role in the ongoing intrigue. Mystery, romance, and the unexplainable forces of nature all play a part of this spellbinding story as it unfolds.

The Sol y viento: En breve textbook and accompanying ancillaries have been developed with and around this exciting movie, providing students with exceptional input developed specifically for beginning learners. Language is presented within the context of the movie; and linguistic skills are developed through engaging, meaningful activities that encourage students to develop real-world skills and abilities. Both instructors and students alike will find Sol y viento: En breve to be a highly motivating introductory Spanish program designed especially for today’s language learners!

Bill VanPatten is Professor and Director of Applied Linguistics and Second Language Studies at Texas Tech University. His areas of research are input and input processing in second language acquisition and the effects of formal instruction on acquisitional processes. He has published widely in the fields of second language acquisition and language teaching and is a frequent conference speaker and presenter. His publications include Making Communicative Language Teaching Happen (with James F. Lee, 2003,McGraw-Hill), From Input to Output: A Teacher’s Guide to Second Language Acquisition (2003, McGraw-Hill), Processing Instruction: Theory, Research, and Practice (2004, Lawrence Erlbaum Associates) and most recently, Theories in Second Language Acquisition: An Introduction (with Jessica Williams, 2007, Lawrence Erlbaum Associates). He is the lead author of Vistazos, ¿Sabías que...?, Destinos and Sol y viento. Dr. VanPatten is the 2007 recipient of the Anthony Papalia Award for Excellence in Teacher Education, awarded jointly by ACTFL and NYSAFLT. When not engaged in academic activities, he writes fiction and performs stand-up comedy. He has recently published his first work of fiction, a collection of short stories titled Chicago Tales, published by Outskirts Press (2007).