Items related to Teachers, Schools, and Society Brief with Reader (with...

Teachers, Schools, and Society Brief with Reader (with CDROM) 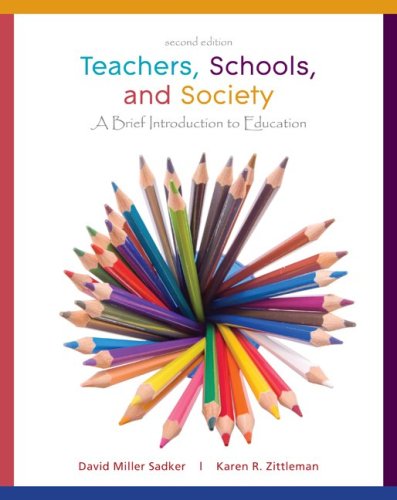 Combining the brevity of a streamlined Introduction to Education text with the support package of a much more expensive book, the brief edition of Teachers, Schools, and Society encourages experienced instructors to explore their own creativity while ensuring that newer faculty can teach the course with confidence. David Sadker’s and Karen Zittleman’s lively writing style captures the joys and challenges of teaching. The text stresses the importance of fairness and justice in school and society, focuses on the most crucial topic areas, and integrates the most current issues in education. In addition, the wealth of activities included--from online video observations to portfolio-building exercises--offers a broad range of ways to introduce students to the teaching profession.

David Sadker has taught in middle and senior high schools, as well as at the college level, and has been a professor at the University of Wisconsin-Parkside and American University (Washington, DC) for more than three decades. He and his late wife Myra Sadker, gained a national reputation for research and publications concerning the impact of gender in schools. (To learn more about Myra’s life and work, visit www.sadker.org). Dr. Sadker has degrees from CCNY, Harvard University, and the University of Massachusetts. He has written several books and numerous articles in both professional and popular journals. He co-authored Failing at Fairness: How Our Schools Cheat Girls, (Touchstone Press in 1995), and his research has been reported in hundreds of newspapers and magazines including USA Today, USA Weekend, Parade Magazine, Business Week, The Washington Post, The London Times, The New York Times, Time, and Newsweek. He has appeared on local and national television and radio shows such as The Today Show, Good Morning America, The Oprah Winfrey Show, Phil Donahue’s The Human Animal, National Public Radio’s All Things Considered and Talk of the Nation, and twice on Dateline: NBC with Jane Pauley. The Sadkers received the American Educational Research Association’s award for the best review of research published in the United States (1991), their professional service award in 1995, and their Willystine Goodsell award in 2004. The Sadkers were recognized with the Eleanor Roosevelt Award from The American Association of University Women in 1995, and the Gender Architect Award from the American Association of Colleges of Teacher Education in 2001. David Sadker has received two honorary doctorates.

1. Teachers, Schools, and Society Brief with Reader (with CDROM)

2. Teachers, Schools, and Society Brief with Reader (with CDROM)