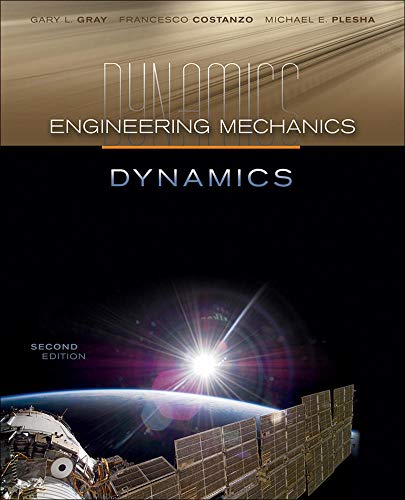 Based upon a great deal of classroom teaching experience, Gray, Costanzo, & Plesha provide a visually appealing learning framework to your students. The look of the presentation is modern, like the other books the students have experienced, and the presentation itself is relevant, with examples and exercises drawn from the world around us, not the world of sixty years ago.

Examples are broken down in a consistent manner that promotes students' ability to setup a problem and easily solve problems of incrementally harder difficulty.

Engineering Mechanics is also accompanied by McGraw-Hill's Connect which allows the professor to assign homework, quizzes, and tests easily and automatically grades and records the scores of the students' work. Most problems in Connect are randomized to prevent sharing of answers and most also have a "multi-step solution" which helps move the students' learning along if they experience difficulty.

Francesco Costanzo is an Associate Professor of Engineering Science and Mechanics in the Engineering Science and Mechanics Department at Penn State. He received the Laurea in Ingegneria Aeronautica from the Politecnico di Milano, Milan, Italy. After coming to the U.S. as a Fulbright scholar he received his Ph.D. in aerospace engineering from Texas A&M University. His primary research interest is the mathematical and numerical modeling of material behavior. He has focused on the theoretical and numerical characterization of dynamic fracture in materials subject to thermo-mechanical loading via the use of cohesive zone models and various fi nite element methods, including space-time formulations. His research has also focused on the development of multi-scale methods for predicting continuum-level material properties from molecular calculations, including the development of molecular dynamics methods for the determination of the stress-strain response of nonlinear elastic systems. In addition to scientifi c research, he has contributed to various projects for the advancement of mechanics education under the sponsorship of several organizations, including the National Science Foundation. For his contributions, he has received various awards, including the 1998 and the 2003 GE Learning Excellence Awards, and the 1999 ASEE Outstanding New Mechanics Educator Award. In addition to teaching dynamics, he also teaches statics, mechanics of materials, continuum mechanics, and mathematical theory of elasticity.

Gary L. Gray is an Associate Professor of Engineering Science and Mechanics in the Department of Engineering Science and Mechanics at Penn State in University Park, PA. He received a B.S. in Mechanical Engineering (cum laude) from Washington University in St. Louis, MO, an S.M. in Engineering Science from Harvard University, and M.S. and Ph.D. degrees in Engineering Mechanics from the University of Wisconsin-Madison. His primary research interests are in dynamical systems, dynamics of mechanical systems, mechanics education, and multi-scale methods for predicting continuum-level properties of materials from molecular calculations. For his contributions to mechanics education, he has been awarded the Outstanding and Premier Teaching Awards from the Penn State Engineering Society, the Outstanding New Mechanics Educator Award from the American Society for Engineering Education, the Learning Excellence Award from General Electric, and the Collaborative and Curricular Innovations Special Recognition Award from the Provost of Penn State. In addition to dynamics, he also teaches mechanics of materials, mechanical vibrations, numerical methods, advanced dynamics, and engineering mathematics.

Michael E. Plesha is a Professor of Engineering Mechanics in the Department of Engineering Physics at the University of Wisconsin-Madison. Professor Plesha received his B.S. from the University of Illinois-Chicago in structural engineering and materials, and his M.S. and Ph.D. from Northwestern University in structural engineering and applied mechanics. His primary research areas are computational mechanics, focusing on the development of fi nite element and discrete element methods for solving static and dynamic nonlinear problems, and the development of constitutive models for characterizing behavior of materials. Much of his work focuses on problems featuring contact, friction, and material interfaces. Applications include nanotribology, high temperature rheology of ceramic composite materials, modeling geomaterials including rock and soil, penetration mechanics, and modeling crack growth in structures. He is co-author of the book Concepts and Applications of Finite Element Analysis (with R. D. Cook, D. S. Malkus, and R. J. Witt). He teaches courses in statics, basic and advanced mechanics of materials, mechanical vibrations, and fi nite element methods.

Book Description McGraw-Hill Education, 2011. Condition: Good. A+ Customer service! Satisfaction Guaranteed! Book is in Used-Good condition. Pages and cover are clean and intact. Used items may not include supplementary materials such as CDs or access codes. May show signs of minor shelf wear and contain limited notes and highlighting. Seller Inventory # 0077891147-2-4

Book Description Condition: good. Item may not include associated media. Used books may have cover wear and markings inside.  Access codes and supplements such as CDs or software are not guaranteed with used items. Seller Inventory # f2-591a