Items related to Destinos: An Introduction to Spanish

Destinos: An Introduction to Spanish 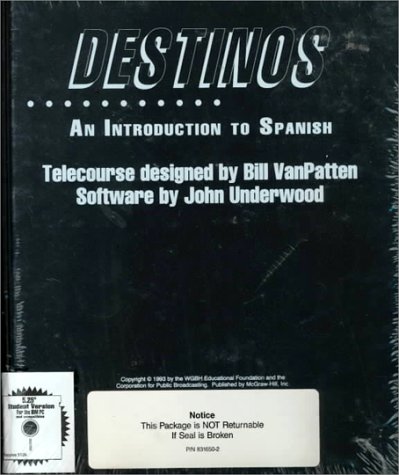 DESTINOS is an innovative beginning Spanish program based on a 26-week television series premiering on PBS in the fall of 1992. The 52 half-hour shows of the series use the powerful appeal of a uniquely Hispanic genre -- the telenovela (soap opera) -- to make language and culture come alive. The situation and context of each episode introduce students to the basic structures, language functions and vocabulary groups of Spanish that are then presented in the print materials. (Most grammar explanations and exercises are in the workbook/study guides.) This complete one-year course is designed to help students develop communicative proficiency -- listening, speaking, reading, and writing -- as well as cultural awareness in Spanish. The plot of DESTINOS is designed to engage student viewers from the very beginning. A wealthy Mexican patriarch, nearing the end of his life, reveals a secret he has kept from his family for many years. His revelation leads to some important questions that must be answered before he dies. Raquel Rodríguez, a Mexican-American lawyer, embarks on a search for those answers, a search that takes her to Spain, Argentina, Puerto Rico, and back to Mexico. Students and viewers can join in the search -- learning Spanish and about the rich and diversified cultural context in which it is spoken throughout the world.

Martha Alford Marks received her Ph.D. from Northwestern University. Co-author of żQu tal? and Destinos, a Spanish video course, she also served on the Advisory Board to Boston PBS station WGBH during the development of the Destinos program, which was funded by the Annenberg Foundation. She is widely known as an ACTFL-certified oral proficiency tester and trainer in Spanish and ESL.