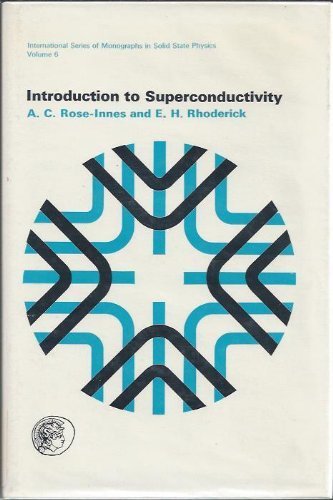 Introduction to Superconductivity differs from the first edition chiefly in Chapter 11, which has been almost completely rewritten to give a more physically-based picture of the effects arising from the long-range coherence of the electron-waves in superconductors and the operation of quantum interference devices. In this revised second edition, some further modifications have been made to the text and an extra chapter dealing with "high-temperature" superconductors has been added. A vast amount of research has been carried out on these since their discovery in 1986 but the results, both theoretical and experimental, have often been contradictory, and seven years later there remains little understanding of their behavior. This book comprises 14 chapters, with the first focusing on zero resistance. Succeeding chapters then discuss perfect diamagnetism; electrodynamics; the critical magnetic field; thermodynamics of the transition; the intermediate state; and transport currents in superconductors. Other chapters cover the superconducting properties of small specimens; the microscopic theory of superconductivity; tunneling and the energy gap; coherence of the electron-pair wave; the mixed state; critical currents of type-II superconductors; and high-temperature superconductors. This book will be of interest to practitioners in the fields of superconductivity and solid-state physics.

'This book is well illustrated and would be suitable for use as a textbook, or as an introduction for those with no previous knowledge of the subject but having a basic background in electricity and magnetism'
Philosophical Magazine

Buy Used
Condition: Poor
Volume 6. This is an ex-library... Learn more about this copy

Book Description Pergamon Press, 1969. Condition: Poor. Volume 6. This is an ex-library book and may have the usual library/used-book markings inside.This book has hardback covers. In poor condition, suitable as a reading copy. No dust jacket. Please note the Image in this listing is a stock photo and may not match the covers of the actual item,650grams, ISBN:0080134696. Seller Inventory # 8234516