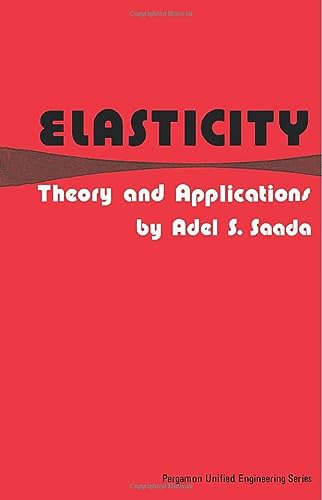 Elasticity: Theory and Applications, now in a revised and updated second edition, has long been used as a textbook by seniors and graduate students in civil, mechanical, and biomedical engineering since the first edition was published in 1974. The kinematics of continuous media and the analysis of stress are introduced through the concept of linear transformation of points and brought together to study in great detail the linear theory of elasticity as well as its application to a variety of practical problems. Elastic stability, the theory of thin plates, and the theory of thin shells are covered. Complex variables are introduced and used to solve two-dimensional and fracture-related problems. Through theory, solved examples and problems, this authoritative book helps the student acquire the foundation needed to pursue advanced studies in all branches of continuum mechanics. It also helps practitioners understand the source of many of the formulas they use in their designs. A solutions manual is available to instructors.

Key Features: --Unifies the study of finite and linear strain, as well as stress under the notion of linear transformation of points
--Uses matrices with an emphasis on geometry as the reader is introduced to the concept of tensor and its associated notations
--Supports the theories and applications with a large number of solved examples throughout the book
--Includes an addendum with additional solved numerical examples and detailed explanations of key topics

Adel S. Saada (Ing., E.C.P., Ph.D., Princeton University) is presently Professor of Civil Engineering at Case Western Reserve University, Cleveland, Ohio. Dr. Saada received his Ingénieur des Arts et Manufactures degree from École Centrale des Arts et Manufactures de Paris, France, and the equivalent of a Master of Science degree from the University of Grenoble, France. Before coming to Princeton University the author was a practicing structural engineer in France. His teaching activities are in two major areas: the first is that of the mechanics of solids and in particular elasticity; the second is that of mechanics applied to soils and foundations. His research activities are primarily in the area of stress-strain relations and failure of transversely isotropic geomaterials. Much of his research work has been supported by personal grants from the National Science Foundation, the U.S. Army, and the U.S. Air Force. Dr. Saada is a member of several professional societies, a consulting engineer, and the author of numerous papers published in both national and international journals.

Shipping: US$ 45.06
From United Kingdom to U.S.A.
Destination, rates & speeds