Items related to Boy in darkness (Literature for life series) 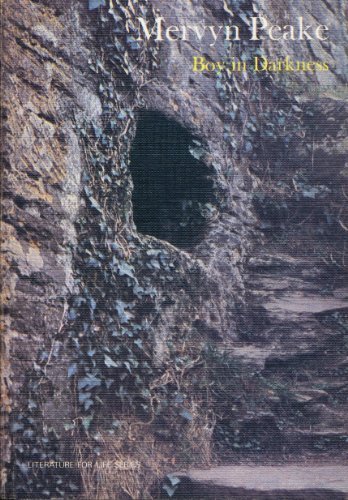 Mervyn Peake (1911–1968) was an English modernist writer, artist, poet, and illustrator who is best known for his pioneering Gormenghast series, which have become classics in the literary fantasy genre. He was also a noted illustrator of classic children's books including Alice's Adventures in Wonderland and Treasure Island. Sebastian Peake is Mervyn Peake's eldest son and the cocompiler of Mervyn Peake: A Man and His Art. Joanne Harris is the author of Blackberry Wine, Chocolat, Five Quarters of the Orange, and The Girl with No Shadow. Maeve Gilmore is Mervyn Peake's widow.

"An illustrator of the caliber of Goya, Cruikshank, Tenniel, Daumier, Doré, and Cocteau. . . . one of the most sensuous and mysterious English writers, a fantasist so concerned with color, sound, and light that they become actors in the fiction. Does anybody else write like this and so well?"  Booklist

"[Peake's books] are actual additions to life; they give, like certain rare dreams, sensations we never had before, and enlarge our conception of the range of possible experience."  C. S. Lewis on The Gormenghast series

"There is no really close relative to it in all our prose literature. It is uniquely brilliant, and we are right to call it a modern classic."  Anthony Burgess on The Gormenghast series

This extravagant epic about a labyrinthine castle populated with conniving Dickensian grotesques is the true fantasy classic of our time."  —Washington Post Book World on The Gormenghast series

Book Description Paperback. Condition: Good. The book has been read but remains in clean condition. All pages are intact and the cover is intact. Some minor wear to the spine. Seller Inventory # GOR001899046

Shipping: US$ 22.34
From United Kingdom to U.S.A.
Destination, rates & speeds

Shipping: US$ 20.43
From United Kingdom to U.S.A.
Destination, rates & speeds