Items related to Saussure's First Course of Lectures on General...

Saussure's First Course of Lectures on General Linguistics (1907): From the Notebooks of Albert Riedlinger (Language and Communication Library) 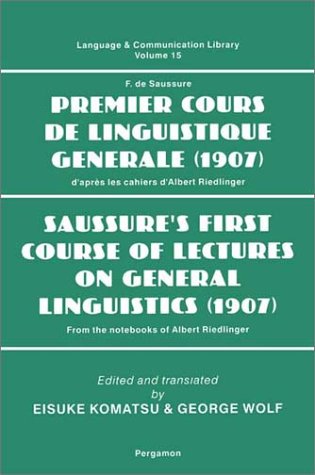 Saussure's Cours de linguistique générale has been one of the seminal books of the twentieth century, having shaped modern linguistics and semiology, and having importantly affected anthropology, philosophy and literary studies. Yet the book was written by Saussure's colleagues, based on student notes taken during the three occasions when Saussure gave his lectures on general linguistics. For Saussure's first course, the notebooks of Albert Riedlinger are certainly the best and the most detailed. They have loomed large in our knowledge of Saussurean linguistics, but a number of Saussure's statements, as recorded by Riedlinger, have never been known to a larger public. Until now, those notes themselves have been unavailable, except in fragmented and incomplete form in Engler's unwieldy and hard-to-find edition of the Cours. Now, the best of the student notes to all three courses will be available for the first time as they were taken down in French, and have been provided with a facing translation, an introduction, and a full analytical index of terminology. With their publication, Saussurean scholars as well as students of linguistics and related disciplines will have at their disposal the most reliable source material for Saussure's thinking on language. It is hoped that this work will encourage those who take Saussure's principal ideas to be sufficiently known from the CLG to reconsider Saussure's ideas in their greater immediacy and in their development, so as to appreciate nuances of his thinking generally unknown until now.

This edition presents Riedlinger's notes intact and in their original order. The notes are accompanied by an introduction and a full English translation of the text. Together with the other two volumes, it offers the best insight yet into the evolution of Saussure's thinking.

Professor Hans Aarsleff, Princeton University
The editors have done a very great service to scholarship. In the past, material relating to the Cours was scattered and inaccessible. These volumes constitute incomparably better access to Saussure's thought than we have previously had either in the 1916 text and its versions in other languages, or in Engler's edition.

Buy Used
Condition: Very Good
Would list as new except for some... Learn more about this copy

1. Saussure's First Course of Lectures on General Linguistics (1907): From the Notebooks of Albert Riedlinger (Language and Communication Library)

2. Saussure's First Course of Lectures on General Linguistics (1907): From the Notebooks of Albert Riedlinger (Language and Communication Library)

Book Description Pergamon, 1996. Condition: Good. A+ Customer service! Satisfaction Guaranteed! Book is in Used-Good condition. Pages and cover are clean and intact. Used items may not include supplementary materials such as CDs or access codes. May show signs of minor shelf wear and contain limited notes and highlighting. Seller Inventory # 008042578X-2-4