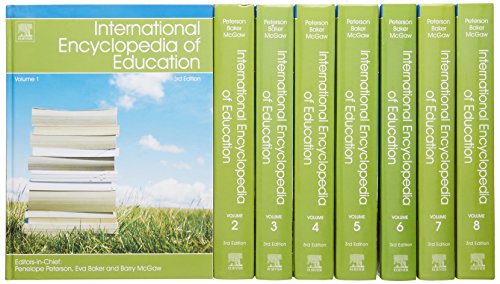 The field of education has experienced extraordinary technological, societal, and institutional change in recent years, making it one of the most fascinating yet complex fields of study in social science.

Unequalled in its combination of authoritative scholarship and comprehensive coverage, International Encyclopedia of Education, Third Edition succeeds two highly successful previous editions (1985, 1994) in aiming to encapsulate research in this vibrant field for the twenty-first century reader. Under development for five years, this work encompasses over 1,000 articles across 24 individual areas of coverage, and is expected to become the dominant resource in the field.

Education is a multidisciplinary and international field drawing on a wide range of social sciences and humanities disciplines, and this new edition comprehensively matches this diversity. The diverse background and multidisciplinary subject coverage of the Editorial Board ensure a balanced and objective academic framework, with 1,500 contributors representing over 100 countries, capturing a complete portrait of this evolving field.

Peterson was awarded the Raymond B. Cattell Early Award from the American Educational Research Association (AERA) in 1986 for her programmatic research on effective teaching and learning. She went on to serve as president of AERA from 1996-1997, and is also a fellow of the American Psychological Association and the American Psychological Society. As AERA president, Penelope led initiatives to reform the organization and to synthesize research-based knowledge, making it more useful to policy makers and practitioners.

More recently, Peterson has served as a member of the National Academy of Sciences Study Panel on the "Science of Learning," which produced the volume, How People Learn-a comprehensive study of learning, based on a synthesis of the research on cognition, cognitive neuroscience, learning, and the design of educational environments that foster effective learning.

Peterson’s current research interests are in learning and teaching in schools and classrooms, particularly in literacy and mathematics; student and teacher learning in reform contexts; and relations among educational research, policy, and practice.

Eva Baker graduated from the University of California, Los Angeles in 1967. She has directed the UCLA Centre for the Study of Evaluation (CSE) since 1975 and is Co-director of the National Center for Research on Evaluation, Standards, and Student Testing (CRESST).

Dr. Baker was a congressionally appointed member of the National Council on Education Standards and Testing and serves on the Independent Review Committee on the Evaluation of Title I Testing. She is currently co-chair of the committee to revise the standards for Educational and Psychological Testing and is a member of the Advisory Committee on Educational Statistics (ACES) for the National Centre for Education Statistics.

Her research at the Center for the Study of Evaluation addresses assessment and accountability models, the design and validation of technology-based learning and assessment systems, and new models to measure complex human performance in large-scale assessments.

Dr. Baker is involved in international, national, and state policy deliberations on assessment.

Dr. McGaw is a Fellow of the Academy of the Social Sciences in Australia, the Australian Psychological Society, and the Australian College of Educators. He received an Australian Centenary Medal “for distinguished service through educational research and policy in 2003.

Dr. McGaw graduated in chemistry from the University of Queensland in Australia and completed his PhD in educational psychology and psychometrics at the University of Illinois in the USA. He has previously held the post of President of the Australian Association for Research in Education and the International Association for Educational Assessment. Dr. McGaw has also served as Executive Director of the Australian Council for Educational Research (a not-for-profit company with an international research and development program) and as Professor of Education at Murdoch University in Perth, Western Australia.

Dr. McGaw’s research interests are in educational measurement and learning. He has had extensive experience in issues of curriculum and assessment in the upper secondary years, including selection procedures for higher education. He chaired governmental review committees dealing with these issues in two Australian states and, in a third, acted as sole reviewer and author of a public discussion document and a report with

"This updated second edition promises to be even more useful to the educational and scholarship community around the world. Drawing upon highly respected scholars in all the multifarious areas of education â€ ranging from the most technical empirical methods to the broadest aspects of educational policy making â€ this work can serve as the reference of first resort for both newcomers and veterans." --N. L. Gage, Stanford University, USA

"Such has been the rapid pace of change in education during the last decade that there is little need for the editors-in-chief of The International Encyclopedia of Education to justify a substantially rewritten second edition ten years, after the first. In recent years key areas such as curriculum, economics of education, evaluation and measurement, and, in particular, developments in teaching and teacher education, have all undergone substantial change. The Encyclopedia provides authoritative and well-researched surveys of these fields. The Encyclopedia should serve two particular audiences well. The first is the general readership of teachers in education faculties and their students requiring up-to-date overviews of developments in a particular field. The Encyclopedia will also be of great value to researchers because it provides, in ways not available elsewhere, an international perspective on current work. The last decade has shown us that many education problems are common to most countries, and educational research is increasingly being carried out within an international cooperatvive framework. The Encyclopedia should act as a further stimulus and provide invaluable support for these endeavours. I welcome its publication and will make use of it." --Maurice Galton, University of Leicester, UK

"This splendid second edition of The International Encyclopedia of Education is more than just a learned report on what has been happening in education. It is also formative and judgemental, and this is its real significance. The great merit of this Encyclopedia lies in its constructiveness. It helps to establish the foundations of the study of education â€ by being factual, reflective, and evaluative in a comprehensive way. Users of the Encyclopedia can see some of the best minds in each field selecting and assessing, in Matthew Arnold's words, ""the best that has been said and thought"" in those areas." --W. F. Connell, The University of Sydney, Australia

"... should be available in any self-respecting library with an interest in education ... Not only is it beautifully produced, but the cross-referencing between articles, the excellent development of themes and topics, and the extremely useful Volume 12, consisting of a list of contributors, subject and name indices, and the classified list of entries, make this a very user-friendly encyclopedia ... immensely readable ... informative and up-to-date." --International Journal of Educational Development, 1994

"The 2nd edition is even more impressive [than the first] and must be viewed as a premier resource when judged on virtually every criteria applied to a reference work." --Choice, October 1994

"... without question, the most complete and comprehensive reference source in the English language on education. ... The authors are among the top scholars in their fields, and they bring authority as well as knowledge to their subjects ...outstanding in their coverage of complex and rapidly changing disciplines. ... The entries are benchmarks for research as they are, generally, excellent, state-of-the-art discussions ... superbly edited, well organized, thoughtfully indexed, and clearly written." --ARBA, Philip G. Altbach, 1995

"... will be welcomed by those scholars of education who have come to rely on the Encyclopedia as an accessible first point of reference in their day-to-day work. ... Some 90% of the entries have been newly commissioned, with a rather larger percentage of new contributors. The work is therefore more than a substantial revision: it is effectively new ... the coverage of IEE is quite remarkable ... of high scholarly quality, not condescending in style, up-to-date, meticulously referenced and including a bibliography ... The main strength of the second edition of this remarkable publication lies in its proven ability to provide a quick and reliable introduction to most topics in education on which the specialist, the student, and the casual inquirer are likely to require information. ... While still finding the first edition of IEE of use, I have been using the second edition for several months now and have found it to be quite invaluable for my own purposes and for those of students. ... It is a most welcome successor to the first edition, and is likely to be a standard source of reference for many years to come." --Oxford Review of Education, David Phillips, 1995

"It should be emphasized that this work is not merely an updating of the old edition. Ninety percent of the articles and contributors are new, commensurate with the wide-ranging changes and developments that have taken place in the interval. ... For anyone concerned with education, this highly user-friendly publication will be immensely valuable as a research tool, an information source, and a stimulus to deeper study." --International Review of Education, Christopher McIntosh et al., 1995

"Overall this is a very successful updating of an already proven reference work, the new edition maintaining and if anything improving on the high standards set by the original ... an authoritative, well-balanced and well produced reference source which should be treated with respect as a major contribution in its field." --J. Gordon Brewer, Librarian, Institute of Education, University of London, 1995

Shipping: US$ 7.11
From United Kingdom to U.S.A.
Destination, rates & speeds