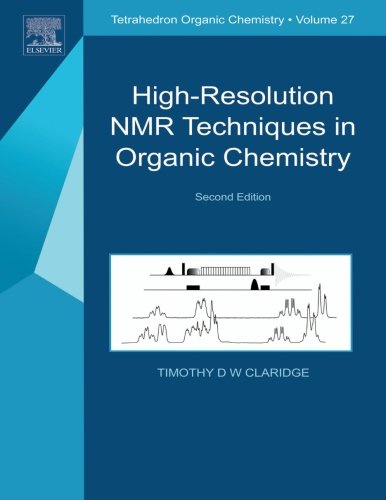 High-Resolution NMR Techniques in Organic Chemistry describes the most important high-resolution NMR techniques that find use in the structure elucidation of organic molecules and the investigation of their behavior in solution.

The techniques are presented and explained using pictorial formats wherever possible, limiting the number of mathematical descriptions. The emphasis is on the more recently developed methods of solution-state NMR spectroscopy with a considerable amount of information on implementation and on the setting of critical parameters for anyone wishing to exploit these methods.

Tim Claridge has over 25 years of practical experience in NMR Spectroscopy and is presently Professor of Magnetic Resonance and Director of NMR Spectroscopy for Organic Chemistry and Chemical Biology in the Department of Chemistry at the University of Oxford. His interest in NMR was ignited as an undergraduate student of Chemistry and Analytical Science whilst undertaking a year-long industrial placement in the spectroscopy laboratory of a leading pharmaceutical company. He subsequently completed a DPhil in protein NMR spectroscopy under the supervision of the late Andy Derome in the Dyson Perrins Laboratory at the University of Oxford. He then remained in Oxford and was appointed manager of the organic chemistry NMR facilities and in this capacity co-authored the undergraduate text "Introduction to Organic Spectroscopy (OUP)" with Prof Laurence Harwood and produced the first edition of "High-Resolution NMR Techniques in Organic Chemistry" (Pergamon Press). He became University Research Lecturer (Reader) in 2006, and was made a full Professor and a Fellow of the Royal Society of Chemistry (RSC) in 2014. He served for many years on the RSC NMR Discussion Group committee including as its Chairman for three years. He has co-authored over 170 research papers and his research interests focus broadly on the application of solution-state NMR methods for characterizing small molecules, and for studying their behavior and their interactions, especially as ligands for biological macromolecules.

Praise for the Volume "These two books (volumes 270 and 271) comply with and add to the outstanding reputation of the Methods in Enzymology series as a primary source for detailed and practical information on techniques used in the biological sciences. The excellent, step-by-step description of the techniques described, the clear schematic illustrations, and the frequent addition of technical tricks which are not normally described in the methods sections of scientific journals will facilitate the successful application of the techniques... Together, Methods in Enzymology Volumes 270 and 271 are an invaluable resource for the beginner and the experienced researcher alike." --Daniel Figeys and Ruedi Aebersold in ANALYTICAL BIOCHEMISTRY

Praise for the Series "The Methods in Enzymology series represents the gold-standard." --NEUROSCIENCE

"It is a true 'methods' series, including almost every detail from basic theory to sources of equipment and reagents, with timely documentation provided on each page." --BIO/TECHNOLOGY

"The series has been following the growing, changing and creation of new areas of science. It should be on the shelves of all libraries in the world as a whole collection." --CHEMISTRY IN INDUSTRY

"The appearance of another volume in that excellent series, Methods in Enzymology, is always a cause for appreciation for those who wish to successfully carry out a particular technique or prepare an enzyme or metabolic intermediate without the tiresome prospect of searching through unfamiliar literature and perhaps selecting an unproven method which is not easily reproduced." --AMERICAN SOCIETY OF MICROBIOLOGY NEWS

"If we had some way to find the work most often consulted in the laboratory, it could well be the multi-volume series Methods in Enzymology...a great work." --ENZYMOLOGIA

"A series that has established itself as a definitive reference for biochemists." --JOURNAL OF CHROMATOGRAPHY