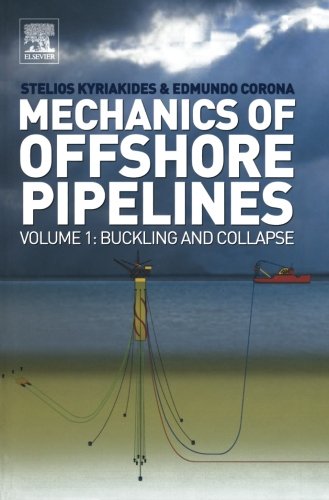 Offshore oil and gas production was conducted throughout the entire 20th century, but the industry's modern importance and vibrancy did not start until the early 1970s, when the North Sea became a major producer. Since then, the expansion of the offshore oil industry has been continuous and rapid. Pipelines, and more generally long tubular structures, are major oil and gas industry tools used in exploration, drilling, production, and transmission. Installing and operating tubular structures in deep waters places unique demands on them. Technical challenges within the field have spawned significant research and development efforts in a broad range of areas. Volume I addresses problems of buckling and collapse of long inelastic cylinders under various loads encountered in the offshore arena. Several of the solutions are also directly applicable to land pipelines. The approach of Mechanics of Offshore Pipelines is problem oriented. The background of each problem and scenario are first outlined and each discussion finishes with design recommendations.

Stelios Kyriakides is currently the John Webb Jennings Chair in Engineering and Professor n Aerospace Engineering and Engineering Mechanics for the University of Texas at Austin. He is also the Director of the Research Center for Mechanics of Solids, Structures, and Materials at UT. Stelios has had over 35 years involvement with the offshore oil and gas exploration and production industry world-wide. Previously, he was a Visiting Scholar at Harvard and California Institute of Technology. He earned a B.Sc. (1st Class Honors) in Aeronautical Engineering at the University of Bristol, a MS and PhD, both in Aeronautics from the California Institute of Technology. He is active in many journals including Elsevier's Applied Ocean Research and the International Journal of Solids and Structures.

Edmundo Corona currently works at the Sandia National Laboratories, researching structural and solid mechanics for more than 30 years. He has conducted research in the areas of elastic-plastic buckling and failure of various structural members ranging from structural shapes to beverage containers. Previously, he has collaborated with NASA Langley on investigations of buckling of flat plates that contain cracks. He has contributed and authored on many journals including Elsevier's International Journal of Solids and Structures. Edmundo earned a BS in Aerospace Engineering, a MS in Engineering Mechanics, and a PhD in Engineering Mechanics, all from the University of Texas at Austin.