Items related to Marquis De Custine and his Russia in 1839

KENNAN, George F. Marquis De Custine and his Russia in 1839

Marquis De Custine and his Russia in 1839 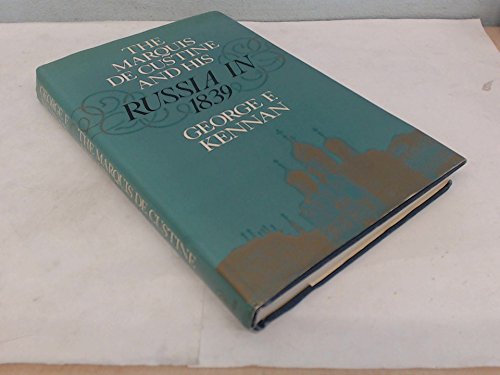 'Even if we admit that La Russie en 1839 was not a very good book about Russia in 1839, we are confronted with the disturbing fact that it was an excellent book...about the Russia of Joseph Stalin, and not a bad book about the Russia of Brezhnev and Kosygin.' It is this paradox which made Custine and his book a suitable subject for the Chichele lectures which the eminent American diplomat and historian, George Kennan, gave at Oxford in 1969 and upon which the present work is based. Astolphe Louis Léonor, Marquis de Custine, left his native Paris in the summer of 1839 and journeyed to Russia to substantiate his belief in Government by aristocracy and to seek arguments against representative government. He returned, in his own words, 'the Partisan of Constitutions," and wrote that 'whoever has well examined that country will be content to live anywhere else.'

Book Description London : Hutchinson And Co. (Publishers) Ltd 1972-01-01, 1972. Hardcover. Condition: Good. Item is in good condition. Some moderate creases and wear. This item may not come with CDs or additional parts including access codes for textbooks. This may not have a dust jacket. Might be an ex-library copy and contain writing/highlighting. Seller Inventory # DS-0091098300-3

Book Description Hutchinson, 1972. Condition: Good. A+ Customer service! Satisfaction Guaranteed! Book is in Used-Good condition. Pages and cover are clean and intact. Used items may not include supplementary materials such as CDs or access codes. May show signs of minor shelf wear and contain limited notes and highlighting. Seller Inventory # 0091098300-2-4

Book Description Hutchinson & Co, London 1972, 1972. 22.0 x 13.5cms, 146pp, very good+ hardcover & dustwrapper Astolphe Louis Lenor, Marquis de Custine, toured Russia to substantiate his belief in aristocratic rule and to formulate arguments against representative government. He concluded that the Russian nobles were subservient to the Czar, brutal to their subordinates, based their authority on lies; mistrusted the people etc. Seller Inventory # 116428

Book Description Hutchinson, London, 1972. Hard Cover. Condition: Fine. Dust Jacket Condition: Fine. First Edition. No marks or inscriptions. A lovely clean very tight copy with bright unmarked boards and no bumping to corners. Dust jacket not price clipped or marked or torn or creased with ight sunning around spine. 145pp. A fascinating description of Russia by the French Marquis who visited in the summer of 1839 and returned with the words 'whoever has well examined that country will be content to live anywhere else.' We do not use stock photos, the picture displayed is of the actual book for sale. Every one of our books is in stock in the UK ready for immediate delivery. Size: 8.75 x 5.5 inches. Seller Inventory # 015960

Shipping: US$ 18.62
From United Kingdom to U.S.A.
Destination, rates & speeds