Items related to The Dreadful Day: The Battle of Manzikert, 1071

Friendly, Alfred The Dreadful Day: The Battle of Manzikert, 1071

The Dreadful Day: The Battle of Manzikert, 1071 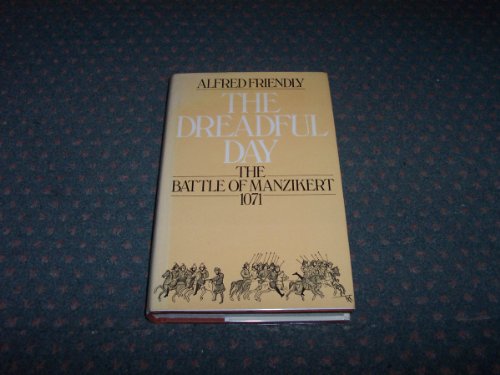 Book Description Univ of Virginia Pr, 1982. Condition: Good. A+ Customer service! Satisfaction Guaranteed! Book is in Used-Good condition. Pages and cover are clean and intact. Used items may not include supplementary materials such as CDs or access codes. May show signs of minor shelf wear and contain limited notes and highlighting. Seller Inventory # 0091435706-2-4

Book Description Hutchinson, London, 1982. Hardcover. Presumed first edition/first printing. Sewn binding. Paper over boards. 256 p. Reference Notes. Bibliography. Index. From Wikipedia: "Alfred Friendly (December 30, 1911 November 7, 1983) was an American journalist, editor and writer for the Washington Post. He began his career as a reporter with the Post in 1939 and became Managing Editor in 1955. In 1967 he covered the Mideast War for the Post in a series of articles for which he won the Pulitzer Prize for International Reporting in 1968. He is credited with bringing the Post from being a local paper to having a position of national prominence. Friendly was born in Salt Lake City. After graduating in from Amherst College in 1933, he came to Washington, DC to look for work. A former professor who worked in the Commerce Department hired him, but his appointment to a high position at such a young age earned him criticism in the press and he resigned. For the next year he travelled the country in the middle of the Depression, eventually returning to become a reporter at the Washington Daily News, writing a column for government employees. Less than two years later he was hired to write the same kind of column for the Post, where he was soon assigned to cover war mobilization efforts and anti-war strikes. When World War II broke out he entered the Army Air Force, rising to the rank of Major before leaving in 1945. While in the military he was involved in cryptography and intelligence operations, finally becoming the second in command at Bletchley Park, and the highest ranking American officer there. After the war he remained in Europe as press aide to W. Averell Harriman supervisor of the Marshall Plan. A year later he returned to Washington and to the Post, where he became assistant managing editor in 1952 and managing editor in 1955. In 1966 he became an associate editor and a foreign correspondent based out of London. Hearing rumors of war in 1967 he headed to the Middle East where he was present throughout the 1967 War and wrote his series of award winning articles. He retired from the Post in 1971, though he continued writing occasional editorials and book reviews. During his retirement he wrote several books, and after his death the Alfred Friendly Foundation was established. It administers the Alfred Friendly Press Fellowships to bring foreign journalists to the United States for internships at prominent newspapers. The Archives and Special Collections at Amherst College holds a collection of his papers." Also from WIkipedia: "The Battle of Manzikert was fought between the Byzantine Empire and the Seljuq Turks on August 26, 1071 near Manzikert (modern Malazgirt in Mus Province, Turkey). The decisive defeat of the Byzantine army and the capture of the Emperor Romanos IV Diogenes played an important role in undermining Byzantine authority in Anatolia and Armenia, and allowed for the gradual Turkification of Anatolia. The brunt of the battle was borne by the professional soldiers from the eastern and western tagmata, as large numbers of mercenaries and Anatolian levies fled early and survived the battle. [7] The fallout from Manzikert was disastrous for the Byzantines, resulting in civil conflicts and an economic crisis that severely weakened the Byzantine Empire's ability to adequately defend its borders. [8] This led to the mass movement of Turks into central Anatolia by 1080, an area of 78, 000 square kilometres (30, 000 sq mi) had been gained by the Seljuk Turks. It took three decades of internal strife before Alexius I (1081 to 1118) restored stability to Byzantium. Historian Thomas Asbridge says: "In 1071, the Seljuqs crushed an imperial army at the Battle of Manzikert (in eastern Asia Minor), and though historians no longer consider this to have been an utterly cataclysmic reversal for the Greeks, it still was a stinging setback." Good in fair dust jacket. Signed by author. DJ has wear, soiling, creases, and tears. Seller Inventory # 68440