Items related to The doodlebugs: The story of the flying-bombs

The doodlebugs: The story of the flying-bombs 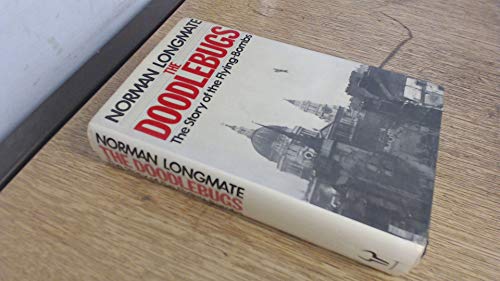 1. The Doodlebugs: Story of the Flying Bombs

Book Description Hardback. Condition: Fair. A readable copy of the book which may include some defects such as highlighting and notes. Cover and pages may be creased and show discolouration. Seller Inventory # GOR002635597

Book Description Hutchinson, 1981. Condition: Fair. This is an ex-library book and may have the usual library/used-book markings inside.This book has hardback covers. In fair condition, suitable as a study copy. Dust Jacket in fair condition. Please note the Image in this listing is a stock photo and may not match the covers of the actual item,950grams, ISBN:009144750X. Seller Inventory # 6247461

3. The Doodlebugs: Story of the Flying Bombs

Shipping: US$ 15.32
From United Kingdom to U.S.A.
Destination, rates & speeds

4. The Doodlebugs: Story of the Flying Bombs

5. The Doodlebugs: Story of the Flying Bombs

6. The Doodlebugs: Story of the Flying Bombs

Shipping: US$ 10.21
From United Kingdom to U.S.A.
Destination, rates & speeds

7. The Doodlebugs. The Story of the Flying Bombs

Book Description Hutchinson & Co Ltd, London, 1981. Hardcover. Condition: Very Good. Dust Jacket Condition: Very Good. Jacket by the author (illustrator). 1st Edition. First edition, first impression. SIGNED BY THE AUTHOR, WITHOUT DEDICATION, IN BLUE PEN, ON TITLE PAGE. Some slight edge wear to top and bottom of jacket and spine, corners slightly bruised, some slight spotting to page fore edges, not price clipped (Ł12.95), small previous owner's name to ffep, internally clean tight and square, overall a vg++ copy. 549pp, illustrated. Norman Longmate (1925-2016), war historian, "covers the Doodlebug campaign in precise detail at both ends of the program, the Germans who created the V1s and the Britons who endured them and struck back. The V1 campaign was typical Hitlerian thinking. an attempt to win a war based on propaganda, and he believed that if he hammered London with sufficient flying bombs, the Londoners and British government would crack under the 'hammer-blows'. As usual, he under estimated the British and over estimated his weapons and strategy. The V1s killed many people, rubbed British nerves raw, forced the British and Americans (American AA guns) to take a large number of counter measures, but did not stop the Allies from continuing their advance into Germany, nor stop the bombing of German cities, nor make Allies seek peace. In the end, the V1s were 1950s weapons being fought in the 1940s, and while they caused considerable tragedy, they had little impact on the outcome of the war. London showed the resilience seen during the Blitz, despite the exhaustion of six years of war" (Amazon Review). Scarce signed. Signed by Author(s). Seller Inventory # 007606

Shipping: US$ 31.91
From United Kingdom to U.S.A.
Destination, rates & speeds