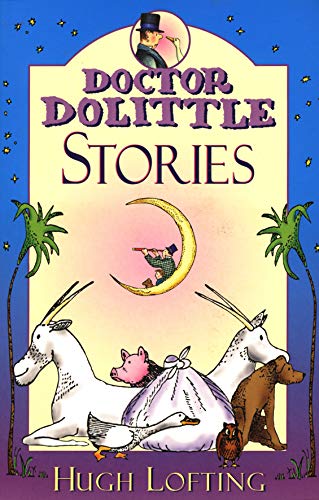 Eight complete stories about the famous Doctor who could talk to the animals. An excellent introduction which highlights all the most memorable incidents: the way he realises his gifts with animals, his meeting with the Pushmi-Pullyu, and how he sets off to sea. His is an entrancing world and the reader is soon involved with all the animal characters, Gub-Gub the pig, Jip the Dog, Too Too the owl. A fine omnibus edition.

Hugh Lofting was born in Maidenhead in 1886. As a child he kept a miniature zoo and wildlife museum in his mother's linen cupboard and enjoyed making up stories for his family. He later studied engineering in London and the United States, and visited Canada, Africa and the West Indies. After his marriage in 1912 he settled in the United States. Hugh Lofting fought in the trenches during World War I and it was whilst observing the lack of compassion shown to the horses on the battlefields that the idea for Doctor Dolittle was born. He was the main character in letters Hugh sent home from the front to entertain his children. The successful publication of The Story of Doctor Dolittle in 1920 was followed by a further eleven books. In 1923 Hugh Lofting was awarded the Newbery Medal. He died in 1947.

"A work of genius. It is the first real children's classic since Alice" -- Hugh Walpole "Any child who is not given the opportunity to make the acquaintance of this rotund, kindly and enthusiastic doctor/naturalist and all of his animal friends will miss out on something important" -- Jane Goodall