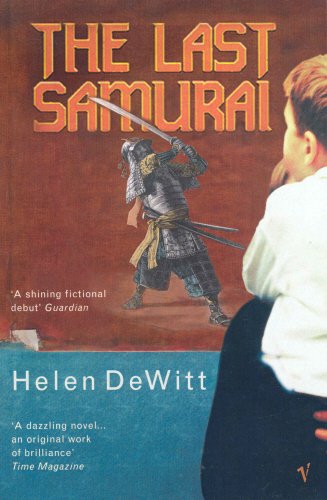 Sibylla, a single mother from a long line of frustrated talents, has unusual ideas about child rearing. Yo Yo Ma started piano at the age of two; her son starts at three. J.S. Mill learned Greek at three; Ludo starts at four, reading Homer as they travel round and round the Circle Line. A fatherless boy needs male role models; so she plays the film of Seven Samurai as a running backdrop to his childhood. While Sibylla types out back copies of Carpworld to pay the rent, Ludo, aged five, moves on the Hebrew, Arabic and Japanese, aerodynamics and edible insects of the world - they might come in handy, if he can just persuade his mother he's mature enough to know his father's name. He is bound for knowledge of a less manageable sort, not least about his mother's past. And at the heart of the book is the boy's changing relationship with Sibylla - contradictory, touching and tender.

This is the story of a single mother, Sibylla, who comes from a long line of frustrated talents, and her son Ludo, who just happens to be a genius. Obsessed with the film The Seventh Samurai, she makes it a running backdrop to Ludo's childhood. At five Ludo learns ancient Greek, reading Homer as they travel round and round on the London Underground, teaches himself Hebrew, Arabic, Inuit, probability theory, astronomy, and is moving on to Japanese when he decides to embark on the search for his father?preferably the perfect father in the heroic mould, or at the very least, one with samurai virtues. He is bound for disappointment, and to find out more than he needs about his mother's shaky past. And at the heart of this completely delightful, captivating novel is the boy's changing relationship with his mother?contradictory, touching, and tender.

Full of linguistic pyrotechnics, fabulous learning, philosophy, science, and the workings of a brilliant mind, this is a must-read novel for everyone who relishes language, extravagant ideas, game theory, science, parenthood, not to mention Kurosawa's cinematic masterpiece.