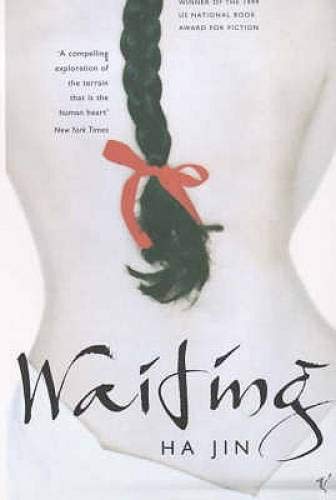 For more than seventeen years, Lin Kong, a devoted and ambitious doctor, has been in love with an educated, clever, modern woman, Mannu Wu. But, back in the traditional world of his home village lives the wife his family chose for him when he was young. Every year he visits her in order to ask, again and again, for a divorce. In a culture in which the ancient ties of tradition and family still hold sway and where adultery discovered by the Party can ruin lives forever, Lin's passionate love is stretched ever more taut by the passing years. Every summer, his compliant wife agrees to a divorce but then backs out. This time, Lin promises, will be different. Tracing these lives through their summer of decision and beyond, Ha Jin vividly conjures the texture of daily life in a place where the demands of human longing must contend with the weight of centuries of wisdom.

"Every summer Lin Kong returned to Goose Village to divorce his wife, Shuyu." Like a fairy tale, Ha Jin's masterful novel of love and politics begins with a formula--and like a fairy tale, Waiting uses its slight, deceptively simple framework to encompass a wide range of truths about the human heart. Lin Kong is a Chinese army doctor trapped in an arranged marriage that embarrasses and repels him. (Shuyu has country ways, a withered face, and most humiliating of all, bound feet.) Nevertheless, he's content with his tidy military life, at least until he falls in love with Manna, a nurse at his hospital. Regulations forbid an army officer to divorce without his wife's consent--until 18 years have passed, that is, after which he is free to marry again. So, year after year Lin asks his wife for his freedom, and year after year he returns from the provincial courthouse: still married, still unable to consummate his relationship with Manna. Nothing feeds love like obstacles placed in its way--right? But Jin's novel answers the question of what might have happened to Romeo and Juliet had their romance been stretched out for several decades. In the initial confusion of his chaste love affair, Lin longs for the peace and quiet of his "old rut." Then killing time becomes its own kind of rut, and in the end, he is forced to conclude that he "waited eighteen years just for the sake of waiting."

There's a political allegory here, of course, but it grows naturally from these characters' hearts. Neither Lin nor Manna is especially ideological, and the tumultuous events occurring around them go mostly unnoticed. They meet during a forced military march, and have their first tender moment during an opera about a naval battle. (While the audience shouts, "Down with Japanese Imperialism!" the couple holds hands and gazes dreamily into each other's eyes.) When Lin is in Goose Village one summer, a mutual acquaintance rapes Manna; years later, the rapist appears on a TV report titled "To Get Rich Is Glorious," after having made thousands in construction. Jin resists hammering ideological ironies like these home, but totalitarianism's effects on Lin are clear:

Let me tell you what really happened, the voice said. All those years you waited torpidly, like a sleepwalker, pulled and pushed about by others' opinions, by external pressure, by your illusions, by the official rules you internalized. You were misled by your own frustration and passivity, believing that what you were not allowed to have was what your heart was destined to embrace.

Ha Jin himself served in the People's Liberation Army, and in fact left his native country for the U.S. only in 1985. That a non-native speaker can produce English of such translucence and power is truly remarkable--but really, his prose is the least of the miracles here. Improbably, Jin makes an unconsummated 18-year love affair loom as urgent as political terror or war, while history-changing events gain the immediacy of a domestic dilemma. Gracefully phrased, impeccably paced, Waiting is the kind of realist novel you thought was no longer being written. --Mary Park From the Inside Flap:

"In Waiting, Ha Jin portrays the life of Lin Kong, a dedicated doctor torn by his love for two women: one who belongs to the New China of the Cultural Revolution, the other to the ancient traditions of his family's village. Ha Jin profoundly understands the conflict between the individual and society, between the timeless universality of the human heart and constantly shifting politics of the moment. With wisdom, restraint, and empathy for all his characters, he vividly reveals the complexities and subtleties of a world and a people we desperately need to know."--Judges' Citation, National Book Award
"Ha Jin's novel could hardly be less theatrical, yet we're immediately engaged by its narrative structure, by its wry humor and by the subtle, startling shifts it produces in our understanding of characters and their situation."--"The New York Times Book Review
"Subtle and complex--his best work to date. A moving meditation on the effects of time upon love."--"The Washington Post
"A high achievement indeed."--Ian Buruma, "The New York Review of Books
"A portrait of Chinese provincial life that terrifies with its emptiness even more than with its all-pervasive vulgarity. The poet in [Jin] intersperses these human scenes with achingly beautiful vignettes of natural beauty."--"Los Angeles Times
"A simple love story that transcends cultural barriers--. From the idyllic countryside to the small towns in northeast China, Jin's depictions are filled with an earthy poetic grace--. Jin's account of daily life in China is convincing and rich in detail."--"The Chicago Tribune
"Compassionate, earthy, robust, and wise, Waiting blends provocative allegory with all-too-humancomedy. The result touches and reveals, bringing to life a singular world in its spectacular intricacy."--Gish Jen, author of Who's Irish?
"A remarkable love story. Ha Jin's understanding of the human heart and the human condition transcends borders and time. Waiting is an outstanding literary achievement."--Lisa See, author of On Gold Mountain

Book Description Paperback. Condition: New. Language: English. Brand new Book. For more than seventeen years, Lin Kong, a devoted and ambitious doctor, has been in love with an educated, clever, modern woman, Manna Wu. But back in his traditional home village lives the humble, loyal wife his family chose for him years ago. Every summer, he returns to ask her for a divorce and every summer his compliant wife agrees but then backs out. This time, after eighteen years' waiting, Lin promises it will be different. Seller Inventory # AAZ9780099287599

Shipping: US$ 5.32
From United Kingdom to U.S.A.
Destination, rates & speeds

Book Description Paperback / softback. Condition: New. New copy - Usually dispatched within 4 working days. For more than seventeen years, Lin Kong, a devoted and ambitious doctor, has been in love with an educated, clever, modern woman, Manna Wu. Every summer, he returns to ask her for a divorce and every summer his compliant wife agrees but then backs out. Seller Inventory # B9780099287599

Shipping: US$ 13.27
From United Kingdom to U.S.A.
Destination, rates & speeds

Shipping: US$ 20.00
From United Kingdom to U.S.A.
Destination, rates & speeds

Shipping: US$ 33.35
From United Kingdom to U.S.A.
Destination, rates & speeds