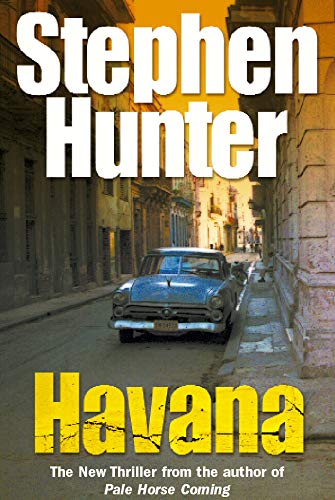 High summer in Cuba, 1953, and Havana gleams with possibility. Flush with booming casinos, sex and drugs, Havana is a lucrative paradise for everyone from the Mafia and United Fruit to pimps, porn-makers, and anyone looking to grab a piece of the action - including the Cuban government, which naturally honours the interests of its old ally, the USA. Of course, where there's paradise, trouble can't be far behind. Trouble, in this case, makes its entrance in the terrifically charismatic and silver-tongued form of a young revolutionary named Fidel Castro. The Caribbean is fast becoming a strategic Cold War hub, and Soviet intelligence has taken Castro under its wing. The CIA's response is to send the one man capable of eliminating Castro: the legendary gunfighter and ex-Marine hero Earl Swagger, who proved his lethal talent in Stephen Hunter's previous novels. In Cuba, Earl finds himself up to his neck in treacherous ambiguity, where the old rules about honour and duty don't apply, and where Earl's target seems to have more guts and good luck than anyone else in Cuba.

Reluctantly leaving his wife and hero-worshipping son at home, Swagger flies off to Cuba in 1953 to act as a bodyguard for "Boss" Harry Etheridge, a rainmaking Southern congressman who proposes investigating the influence of New York gangsters on the Guantanamo Naval Base. Almost as soon as his lungs fill with the humid Caribbean air, Swagger regrets accepting this assignment. Not only must he contend with posturing, backstabbing U.S. intelligence agents, but Boss Harry proves to be both incautiously lustful (forcing Earl to rescue him from a Havana brothel confrontation) and a big target for mobsters who don't want American politicians or anyone else upsetting the profitable criminal equilibrium of Batista-era Cuba. Swagger exacerbates the risk to his longevity by agreeing to help the U.S. government assassinate Cuba's revolutionary darling of the moment, Fidel Castro--a task that will pit this Arkansas lawman against a disenchanted Russian killer who's been charged with protecting and mentoring the 26-year-old agitator.

Given Swagger's well-established weaponry skills, it's hardly surprising that Havana is peppered with tightly choreographed shootouts, both on dusty country roads and in a Zanja Street porno theater full of moaning patrons. That's the male fantasy part; this novel's literary inclination shows in its portrayal of Havana as a richly decadent city full of shiny-fendered Cadillacs, jaded whores, and casinos flushing money onto Florida-bound boats. While Ernest Hemingway and mob boss Meyer Lansky make cameo appearances here, only Castro leaves much of an impression, whether he's bumbling through an attack on a military barracks or defending himself against a father who thinks him lazy, vain, and "womanly" ("I am between opportunities, but I swear to you, I am a man of destiny"). Although Swagger's climactic gunfight tests the limits of credibility, Havana remains an unusually substantive page-turner, expertly blending hostilities with humor and heart. --J. Kingston Pierce

Stephen Hunter, film critic for the Washington Post and winner of the Pulitzer Prize and the American Society of Newspaper Editors Award for criticism, is the author of twelve novels. He lives in Baltimore, Maryland.